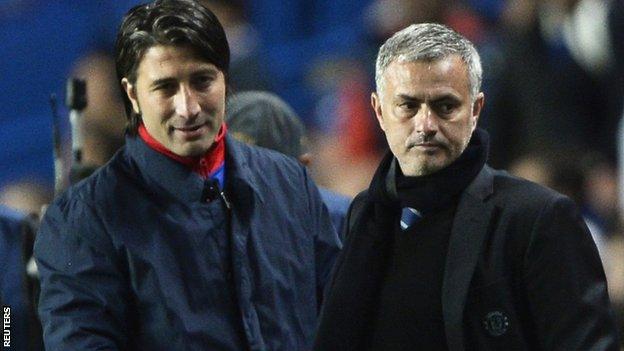 Chelsea manager Jose Mourinho says he should take the blame for his team's Champions League 2-1 defeat by Basel.

Oscar put the home side ahead but Mohamed Salah equalised for Basel and Marco Streller headed in a late winner.

"When we lose I don't speak about the players or individuals, I speak about my responsibility," said Mourinho. "I am responsible."

New signing Samuel Eto'o started and Demba Ba was a second-half substitute, with Fernando Torres not on the bench.

However, the Portuguese insisted he has no concerns over his striking options, despite a lack of goals from them.

"I'm happy with the three strikers for the rest of the season," he said.

Cameroon striker Eto'o made his home debut after joining from Russian side Anzhi Makhachkala, but did not test Basel goalkeeper Yann Sommer until injury time at Stamford Bridge.

Fellow forward Ba was introduced before Basel's second goal as the Blues searched for a winner, while £50m signing Torres was not named in Mourinho's matchday squad.

The trio have scored only one of the Blues' seven goals in their opening six matches, when Torres netted in the Uefa Super Cup defeat by Bayern Munich.

"The players are good players and good professionals, and try their best every day and every match," added Mourinho. "The happy moment will arrive."

They were punished by the Swiss champions as impressive winger Mohamed Salah levelled with a curling shot before skipper Marco Streller headed in a late winner.

Mourinho believes the Blues will have to beat Basel in the return fixture on 26 November to "compensate" for their home defeat.

The Blues, who became the first Champions League holders to be eliminated at the group stage last season, must also play German side Schalke and Romanian champions Steaua Bucharest.

"We lost three points that we must get somewhere," said the Portuguese. "We must get them, in Basel, or Schalke, or Bucharest, or all of them or some of them.

"Normally you have to win the matches at home and get a few points away. Now we must win six points at home, Schalke and Steaua, but we have also to win points away.

"Probably we have to go to win at Basel to compensate for the defeat today.

"But the objective of finishing in the top two in the group phase and to go to the next stage of the Champions League is an objective that is not lost - far from it.