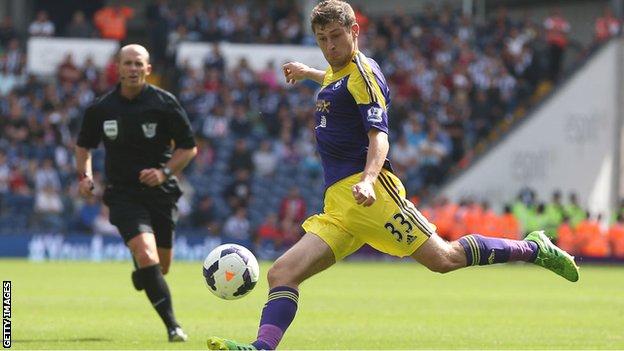 Defender Ben Davies says Swansea will not be overawed when they step onto the Mestalla Stadium to face Valencia on Thursday.

Swansea face the Spanish club in Group A of the Europa League.

It is the first time the Swans have played in this stage of the tournament, but Wales left-back Davies, 20, says the team are aiming high.

"I think we'd take a draw if it came to it, but we're hoping to win and I'm sure that's possible," said Davies.

Swansea qualified for the qualifying rounds of the Europa League by winning the Capital One Cup last season.

Comfortable wins over Malmo of Sweden and Romanian side Petrolul Ploiesti earned them a place in group stages.

But they face a step-up in class against Valencia, who are the top seeds in the group.

However, Davies believes the stature of their opponents makes no difference to Swansea's approach.

"The attitude doesn't change at all," he added.

"We're still going to go into the game looking to win it and I'm sure if we put in a performance we'll be able to do that."

Manager Michael Laudrup is also confident, especially as Valencia have made a poor start to their domestic season.

The Spanish side have won only one of their first four games and are languishing in 16th in the table.

"We're up against the top team in the group on their home ground so all the pressure is on Valencia," said Laudrup.

"I'm quite confident because I don't think even if Valencia is a huge team, one that's been in two Champions' League finals and Europa League and Uefa Cup finals in the past 10-11 years, I don't think the gap between the two teams now is that big.

"Of course we have to be very, very focussed from the first minute.

"I can imagine after this [poor start for Valencia] that the players really want to come out and show that they can play football and they are much better than they've showed up until now in the beginning of the season.

"So we have to be prepared, particularly the first 15-20 minutes otherwise it will be difficult."

Swansea will be without their former Valencia midfielder Pablo Hernandez who has a hamstring injury, while midfielder Leon Britton is another absentee having been sent off against Petrolul Ploiesti in the play-off round.

But striker Wilfried Bony appears to be winning his battle to recover from a rib injury and should be fit to play.