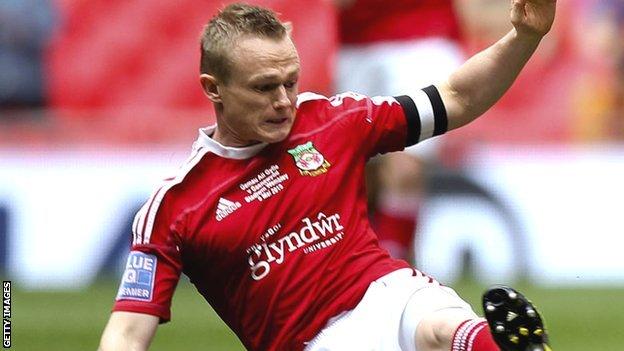 Wrexham captain Dean Keates is still "a couple of weeks" away from making his return after having an operation in the close season.

The midfielder underwent surgery on a toe in July, and has yet to appear for the Dragons this season.

"He's a couple of weeks away yet because he's not done any training at all," said manager Andy Morrell.

"But when you're winning there's no rush," he added after his side's 3-0 win over Gateshead.

The victory at Gateshead was Wrexham's second successive win after a run of three straight defeats, and lifted them to 15th in the table.

I do want my skipper back if I can

Morrell says he is happy with the performance of his midfield players in the absence of Keates, but is keen to get his captain back into the fold.

"The lads are doing great in there, the three of them, so you're not going to move them out," he said.

"But somebody like Keatesy coming back puts more pressure on them to do well, so I do want my skipper back if I can."

Keats has done some training with the team but is not yet able to play in boots for any length of time and according to Morrell still has some work to do before he is fully fit.

In the meantime, goals from Brett Ormerod, Steve Tomassen and Andy Bishop clinched all three points at Gateshead following the 2-0 win over Luton Town on 13 September.

The two wins lift the pressure off the manager after a poor early season that saw Wrexham record their worst run of results since Morrell's appointment in October 2011.

"We've got another long trip to Aldershot [on Saturday], so we've got to recover right and go down there and it'll be a really tough game.

"But we're in a better place now than we were this time last week, put it that way."