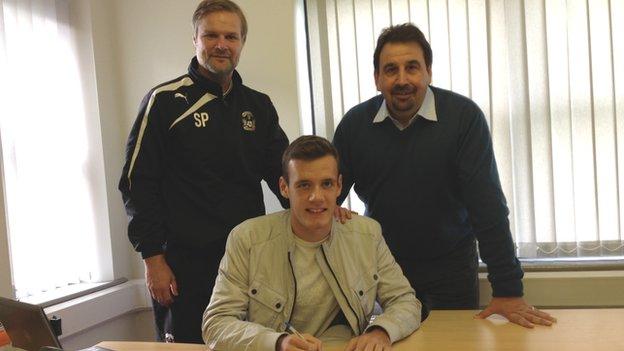 The 18-year-old was out of contract at Ibrox but, because he was offered a new deal by Rangers in the summer, the Sky Blues have had to agree a compensation package with the Glasgow giants.

After their latest takeover this summer City remain under a transfer embargo.

But they also have special Football League dispensation to operate on a one player in, one player out basis.

Since the embargo was reinforced following the purchase of the club by Otium in June, five players have left.

This allows them to sign any five new players who are on no more than 75% of the wages of the relevant departed player, starting with the Scotland Under-18s captain.

"Stuart is a player I've had my eye on for some time," said manager Steven Pressley, himself a former Rangers player. "I believe he has a great future ahead of him.

"He's still got a rawness about him that we need to work on," he told BBC Coventry & Warwickshire. "But he has already got a good physical presence for his age.

"First and foremost he has to establish himself in our Under-21 side, but he has the ingredients to be a very good young player.

"And, as have already shown this season, the path to the first team is there for every player - no matter how old they are. If we think he's ready to play, he'll play."

Coventry, now playing their football 34 miles down the road in Northampton at Sixfields, currently stand 20th in League One - level on points with two of the teams in the League One drop zone.

But they have lost once in seven games, having started the season on -10 points, after being punished for going into administration for the second season running.