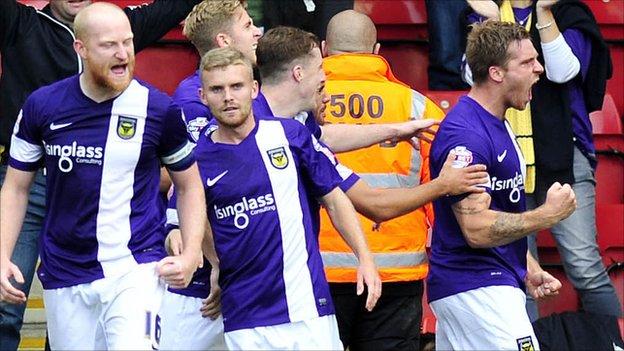 Oxford United defender Johnny Mullins says he is determined to continue improving his game despite making a fine start to the season.

The 27-year old joined the club this summer after a loan spell last season, and has been a key figure in the team's unbeaten start in League Two.

Mullins has shone defensively, but also netted three goals for the team and said he is loving life with the U's.

"There is more to come and I'm looking to improve," Mullins told BBC Oxford.

Meanwhile, midfielder Andy Whing has backed the side to maintain their current high standards despite a double injury blow.

Captain Jake Wright has undergone surgery on a groin abscess and last season's top scorer James Constable has also been ruled out for four-to-six weeks with a chipped bone in his foot.

The pair missed the battling 2-2 draw at Cheltenham which extended United's unbeaten run and Whing said the result showed that those who are fit are capable of plugging any gaps.

"We are kind of thin on the ground," Whing admitted.

"They are big players for us. Jake Wright is a massive loss for us at the back, but (Michael) Raynes did well and it shows what character we've got at this club."