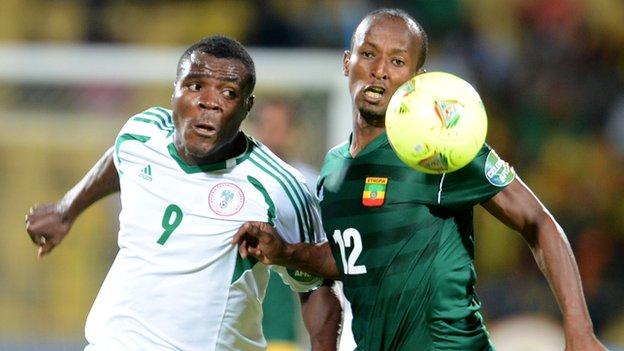 Nigeria coach Stephen Keshi says he will not underestimate Ethiopia when the sides meet in their 2014 World Cup play-off next month.

Ethiopia are the lowest-ranked side in the final round on the road to Brazil.

But Keshi told BBC Sport: "They didn't get to this stage by mistake, that says a lot about Ethiopia as a team.

"Ethiopia have an unpredictable style which makes it difficult for any opponent. We are going to play both legs like a cup final."

We have to fight hard to get the ticket to Brazil, it won't be easy

The sides last met in a Africa Cup of Nations group game in Rustenburg in January, which the Super Eagles won 2-0 on their way to being crowned champions.

However, Keshi does not think that result will have any bearing come October as he tries to steer Nigeria to their fifth World Cup finals

"You don't talk about the past when it comes to African football, January is a long time ago," explained Keshi, who played at the 1994 World Cup.

"They almost stopped us from progressing to the quarter-final stage, so you cannot underrate them.

"In African football we don't have underdogs. They have the same opportunity to play at the World Cup so we are both starting on a clean slate.

"We have to fight hard to get the ticket to Brazil, it won't be easy and my players clearly understand that."

Meanwhile, the Nigeria Football Federation (NFF) has announced the date for the sides' return leg but the venue has yet to be decided.

The Super Eagles have played all their games in Calabar since 2012, but the refurbished Abuja National Stadium is also ready to host the game.

"A venue has not been decided, but the return leg game will take place on Saturday, 16 November 1600 local time," NFF spokesman Ademola Olajire told BBC Sport.

"The NFF will announce a venue before Friday deadline."