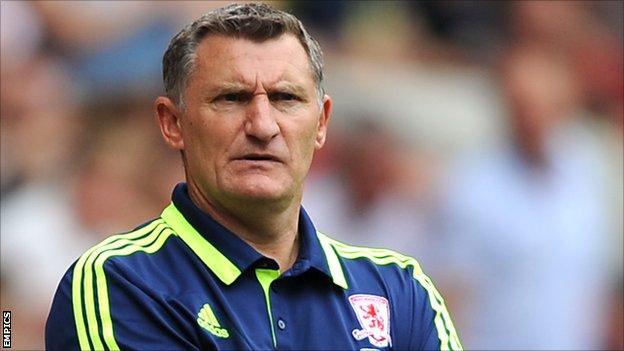 Middlesbrough manager Tony Mowbray has said his side need to turn draws into wins to lift the club up the Championship table after a mixed start.

Boro passed up a two-goal lead in Tuesday's 2-2 draw at Nottingham Forest, a fourth draw in seven games which leaves them 16th in the league.

"We have an opportunity to take some points over the next four or five games," Mowbray told BBC Tees.

"We have to be ruthless. Ultimately we need points to be where we want to be."

Although it is still early on in the campaign, with less than a quarter of the 46 games played, the Teessiders have picked up just one victory - a 1-0 win at Charlton in early August.

However, having already faced Leicester, Blackpool, Wigan and Forest - all expected to be in the promotion mix - Boro now welcome arguably less-fancied sides such as Bournemouth, Huddersfield and Yeovil to the Riverside in the coming weeks.

"The professionals are not overly concerned after seven games, another half a dozen [matches] and it starts to take shape," Mowbray added.

"We have a run of games coming up now where we need to take maximum points."