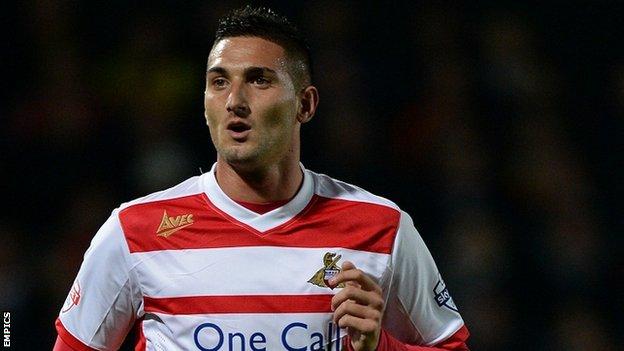 And the 22-year-old Italian told BBC Radio Sheffield: "It would be a shame to be here just a month. If I can stay until January, that would be great.

"I'm really looking forward to more playing time. I think it was the best move for me."

Macheda has not played for United's first team since December last year and said it was time to get his career back on track.

"Another championship club was interested - I had a few to be fair - but I gave my word to Doncaster and I'm glad to be here," he said.

"I need to get my career back on track, I've had some bad experience with loans recently, twice I've gone to a club and they've sacked the manager and brought in new players, so I see this as a great opportunity.

"Nobody knows the future but the most important thing is to play regularly now, score some goals and win some games with Doncaster, and see what happens at the end of the season."

"We're very disappointed," said Macheda, but added: "Doncaster are a good team that play good football and have what it takes to have a good season."