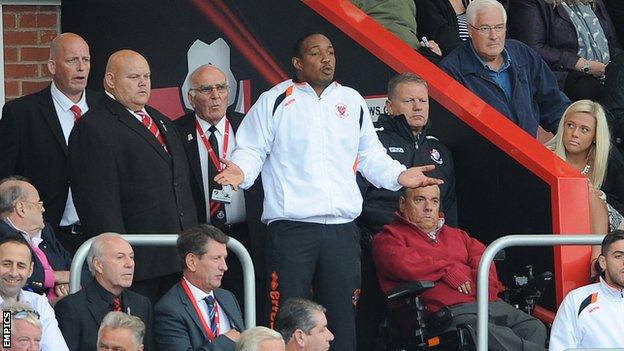 Blackpool manager Paul Ince has been charged by the Football Association for three breaches of disciplinary rules.

The incidents are alleged to have taken place following the on Saturday.

One of the three charges is for "his behaviour towards a match official constituting violent conduct".

Assistant boss Alex Rae has also been charged with threatening behaviour towards an official. Both have until 18:00 BST on Thursday to respond.

Ince, who was for comments made about a referee following the Championship club's League Cup exit at Preston, was sent to the stands in the latter stages of the match at Bournemouth after a bottle he threw inadvertently hit a female supporter.

The other charges Ince faces are for using abusive and/or insulting words and using threatening words and/or behaviour towards an official.

Blackpool suffered their first league defeat of the season on Tuesday,