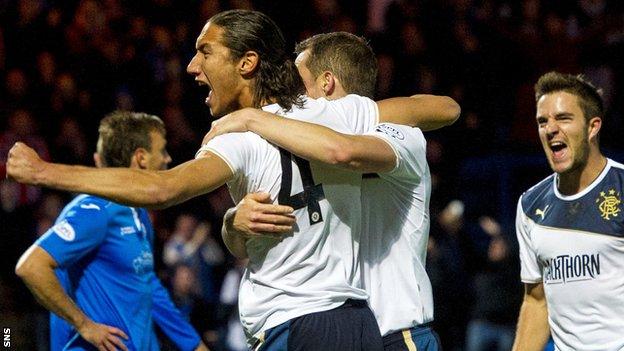 Rangers manager Ally McCoist says he needs to win the League One title to keep his job but is also targeting the Scottish and Ramsden Cup trophies.

McCoist was speaking after his side reached the Ramsdens Cup semi-finals by .

"The one I want to win is the league because I won't be in a job if I don't get us promoted," he said.

"But I want to win every competition we enter and we're still in the Ramsdens and Scottish Cup this season."

Goals from Bilel Mohsni, Jon Daly and Lee McCulloch secured victory over the Championship outfit, who knocked Rangers out of the same competition last season before going on to lift the trophy.

It would be great to win the Ramsdens Cup, but we want to win every cup we're in

McCoist admitted he remains "gutted" to have lost that match to the Dumfries side last season.

Rangers also suffered a shock 2-1 defeat by Forfar Athletic in the first round of this season's League Cup.

But the Glasgow side can now look forward to Thursday's Ramsdens Cup semi-final draw.

A new name will be on the trophy as all four sides who remain have never before won the competition for clubs outside Scotland's top flight.

Rangers could be paired with Championship outfit , League One rivals , or from League Two.

McCoist's side will be firm favourites having added eight summer signings since that defeat by Forfar and having scored 23 goals in five straight wins to lead League One by five points.

"It would be great to win the Ramsdens Cup, but we want to win every cup we're in," said McCoist.