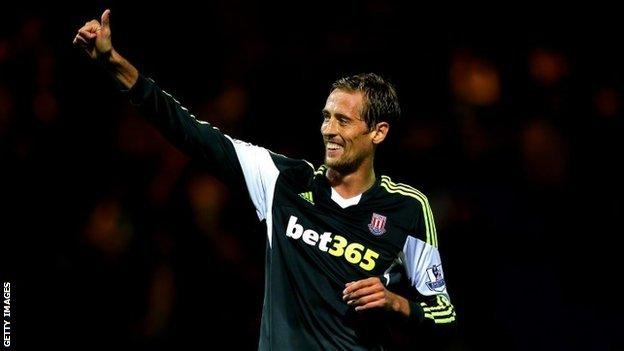 Stephen Ireland scored on his full debut as Stoke beat Tranmere in the Capital One Cup third round.

The midfielder, a deadline day loan signing from Aston Villa, struck from close range in the first half after being put through by Marko Arnautovic.

Rovers had the better of the second half as Jean-Louis Akpa Akpro curled over and Chris Atkinson sliced wide.

But Stoke wrapped up victory with the last kick of the game as Peter Crouch prodded home Oussama Assaidi's ball.

Since replacing Tony Pulis as manager earlier this year, Mark Hughes has been trying to develop a passing style at Stoke - something Potters fans have perhaps not quite been accustomed to over the years.

Hughes' influence was evident at Tranmere, certainly in a first half Stoke dominated as they patiently developed attacks from the back.

They pushed and probed in the opening exchanges, but the players' efforts were let down by poor decision-making in the final third, as Arnautovic and Glenn Whelan shot wide with speculative efforts, while Geoff Cameron over-hit a cross after good build-up play by Jermaine Pennant.

But their patience was rewarded in the 23rd minute when Arnautovic found the run of Ireland with a smart through ball that took out the entire Tranmere defence, allowing the midfielder to calmly side-foot the ball beyond home keeper Owain Fon Williams.

For the next 15 minutes Stoke had Tranmere firmly pegged back inside their own half, although they struggled to turn their possession into genuine goal-scoring chances.

Tranmere, though, rarely looked like punishing the visitors on the counter, even when gifted possession as a wayward Crouch pass found Ryan Lowe, but the striker's second touch saw him knock the ball straight to a Stoke defender.

Stoke have lost just once since their opening-day defeat away to Liverpool.

The hosts had an even better chance to equalise midway through the second half as a flowing move split open the Stoke defence and Akpa Akpro raced into the box, wrong-footed a defender but his curled effort flew over the bar.

That chance evidently gave the Tranmere players more belief and they started to press the Stoke defence, going close again when Atkinson skewed a shot wide from seven yards.

But Stoke settled the away fans' nerves when Crouch brought Assaidi's long pass under control before stabbing the ball into the net.

"We played a Premier League side who have adapted really well in such a short space of time. It is fantastic to see how they have adapted, they are a good passing side.

"It was gut wrenching they scored a second in the last minute but it was a fantastic finish and that it was what they are all about, you give them a couple of chances and they score but overall I was pleased with the way we defended."

"I was really pleased with how we went about our business.

"When you have a fixture like this in the early rounds of the cup, if you don't approach it in the right manner and give respect to the opposition, and make sure your work is correct, you can cause yourself problems.

"But from the first minute I could tell the lads were focused on what was required. There was a good tempo to our passing and our play. We played some really good stuff at times. We were in total control of the game which was really pleasing.

"Our level of performance at the moment is really high."