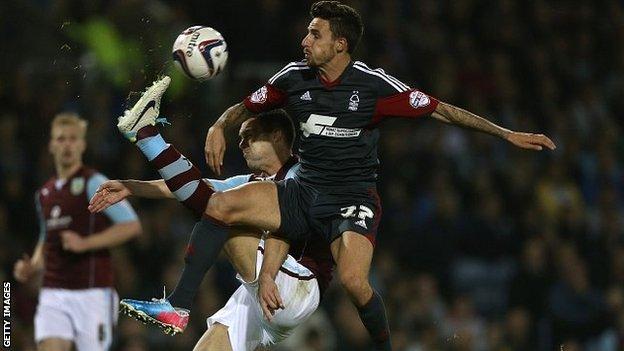 Danny Ings' eighth and ninth goals of the season were enough for Burnley to overcome fellow Championship side Nottingham Forest in the League Cup.

The striker controlled Kieran Trippier's cross and spun to fire home from the edge of the box and level.

His flicked header over Forest goalkeeper Dorus de Vries then made it three successive wins for the Clarets.

The sides came into the game in contrasting form with Burnley up to second on the back of wins over Birmingham and Leeds and Forest having won only one of their past five league games after a strong start to the season.

Danny Ings scored only three goals in 33 games last season. He has nine in 11 this campaign.

The visitors' manager Billy Davies changed all 11 players from Forest's previous outing, however, and it seemed to have rejuvenated his team.

Blackstock and Simon Gillett both went close before a mazy run from Jamie Paterson caused chaos in the Burnley box and Derbyshire pounced after Forest goalkeeper Tom Heaton had blocked an initial effort.

A smart stop by De Vries preserved the visitors' lead as he tipped over Junior Stanislas's header, but the Dutchman could do nothing to prevent Ings' leveller.

The former Bournemouth man's stinging half-volley crashed into the top corner after a slick turn.

Ings could have found the net again soon after, but lashed over as the ball dropped to him in the box.

Derbyshire had wastefully scooped over the top at the other end a minute before Ings showed far sharper striking instincts with a deft nod from Stanislas' set-piece.

Ishmael Miller posed a threat from the bench but Ings' double, a week after scoring twice against Birmingham, proved decisive.

Burnley manager Sean Dyche on in-form striker Danny Ings: "I mention it every week and I'm getting bored of saying it myself, but in a good way, because he's enjoying his football, you can see it.

"He's got that nice energy and we know he's got quality."

Forest boss Billy Davies: "It was a good cup tie. I thought we ran a very good Burnley side that are going very well in the league extremely close.

"Second half it could have gone either way - it was the toss of the coin."