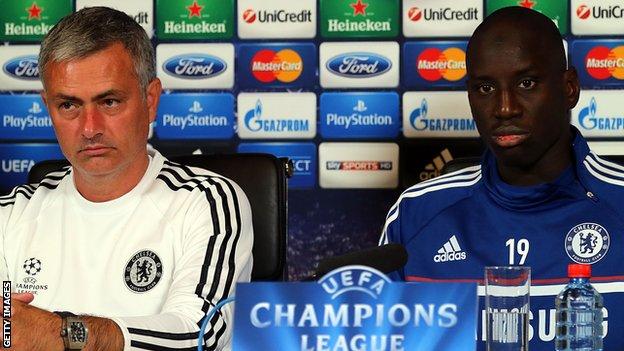 Striker Demba Ba insists he can still have a long-term future at Chelsea despite being interested in joining Arsenal before the transfer deadline.

The Senegal forward, 28, only joined the Blues from Newcastle in January but was a summer target for the Gunners.

He is sure he can force his way into Chelsea boss Jose Mourinho's plans.

"I was ready to go and play [for Arsenal] but it didn't happen. I'm a good professional and will keep doing the same," Ba said.

With Arsenal looking to increase their attacking options, they were interested in signing Ba, only to be told Chelsea would not loan him to a rival.

He has played just 65 minutes for the Blues this season, in the 2-1 win over Aston Villa in August.

And the arrival of Cameroon striker Samuel Eto'o from Anzhi Makhachkala is likely to have a further impact on his chances of regular football.

But, with a contract running until 2016, he is sure he can still prove himself under Mourinho.

Asked if he wanted to leave in the summer, Ba said: "I wanted to play and I want to play.

"It all depends on me and the performance I put in on the pitch. If I play well, I will deserve to play and the manager will put me on the pitch because that's how he is and if I don't perform, it will only be my fault.

"I think the boss said it and I spoke to him before. I won't tell you what we said on the phone but I told him that if I stay, I will keep fighting for the club. Now the matter is the next years with Chelsea and that's it."