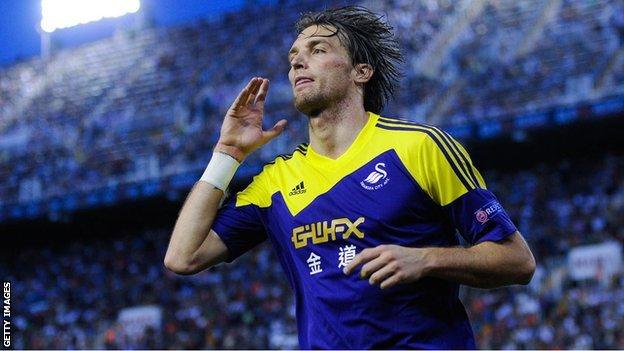 Home defender Adil Rami was sent off for a ninth-minute professional foul when he hauled down Wilfried Bony.

And Bony was first to make the Spanish side pay with his right-footed opener, which went in via a deflection.

After the break Michu fired in from eight yards to make it 2-0 and Jonathan de Guzman curled in a 30-yard free-kick to put Swansea top of Group A.

That concluded a memorable, historic night for the visitors as manager Michael Laudrup returned to the country where he remains revered for his successes as a player at Barcelona and Real Madrid.

Swansea's victory over Valencia is only the second by a Welsh club over a Spanish side in European competition.

The other came on 10 March 1971 when Brian Clark's headed goal gave Cardiff City a 1-0 win over Real Madrid at Ninian Park in the first leg of a European Cup Winners Cup quarter-final tie.

As Swansea and their fans celebrated, the home supporters aimed their howls of derision at Serbian manager Miroslav Djukic, who was appointed in the summer.

Los Che boast a proud record in Europe - they lie 10th in the all-time overall European standings - while Swansea have never been beyond the second round in seven previous forays into European competition.

If Djukic's wholesale changes were intended to garner a positive response to their early-season set-backs, the plan unfolded.

The hosts were left exposed to Swansea's passing style after Frenchman Rami was sent off for dragging down Bony as the Ivory Coast international threatened to race clear.

The visitors took the lead when Alejandro Pozuelo broke away and found Michu on the left and the Spaniard crossed for Bony to convert right-footed from inside the penalty area.

Swansea could have added more as they dominated the first half with Nathan Dyer spurning a great chance when he fired across goal while Michu had a less clear-cut headed chance but was off-balance just outside the six-yard box and saw his effort drift wide.

Bony shot wide from 20 yards just before the break and he missed another opportunity to double the visitors' lead after half-time after being played in by Dyer.

Dyer's well-placed cross gave Bony another chance to double the visitors' lead as they pressed early in the second period.

Michu flicked another chance over the bar from close range as Swansea continued in positive fashion.

But Michu was not to be denied a goal and confidently stroked in Swansea's second from eight yards after Pozuelo found him with a well-weighted pass.

Moments later de Guzman, on loan at the Liberty Stadium from Villarreal, sent a dipping, curling free-kick into the top corner to seal Swansea's victory.