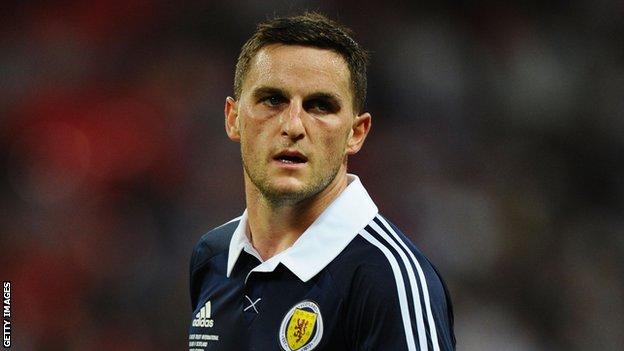 Craig Conway says Brighton will need to find consistency to mount another promotion challenge this season.

He told BBC Sussex: "They brought in Keith Andrews and Stephen Ward who have played at the top level.

"There is quality around the squad and good strength in depth. The main thing is just consistency. If you can build that you will have a chance."

Brighton finished fourth in the Championship last season but were beaten in the play-offs by rivals Crystal Palace.

After sacking Gus Poyet this summer and appointing Oscar Garcia as their new manager, the Sussex club have registered two wins, two draws and two defeats from their opening six league games.

"There are a lot of good players and experience here," Conway added.

"I've played against them two or three times [with Cardiff] and they've been arguably the toughest team we played, football-wise."

Scotland international Conway made 28 appearances for Cardiff last season but has only played once for the Bluebirds in the new campaign, in the Capital One Cup.

He was unable to make his debut for Albion in their 0-0 draw at Reading on Sunday after failing to receive international clearance from the Welsh Football Association.

But, with striker Leonardo Ulloa suspended and attacking midfielder Andrea Orlandi sidelined by injury, Conway is expected to be in the squad to face QPR at Loftus Road on Wednesday.

"I was disappointed to not be cleared in time to play in the game on Sunday but it gave me a couple of days to get things sorted and to train with the lads," he said.

"In the Championship there are so many games and it is a tough league. QPR have started really well and have a lot of good pros there.

"I'm just looking forward to getting back playing. I just hope to come here and do well."