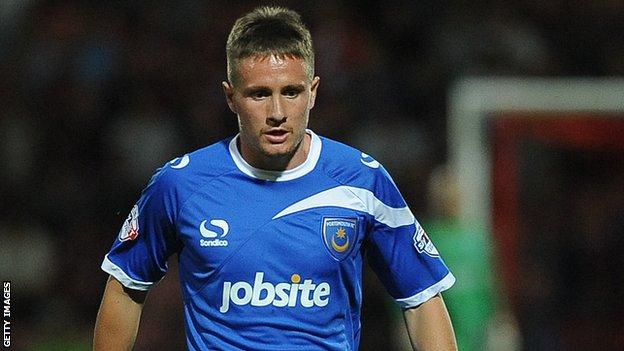 Simon Ferry believes Portsmouth can be serious contenders in League Two this season if they cut out simple errors.

Pompey's 2-1 win at Burton on Saturday was only their second this season.

"I don't think the performances have been bad and we play really good football for this league," midfielder Ferry told BBC Radio Solent.

Ferry off the mark

Ferry, a summer arrival from Swindon, scored his first goal for Portsmouth in Saturday's victory at Burton

"It's stupid little mistakes that have been creeping up that's stopped us from being up there. If we can cut them out we can go on a run and be up there."

The 25-year-old added: "If we can keep tight at the back and not concede, we've got players up front that can always create chances."

Portsmouth, relegated to the fourth tier last season, lie in 13th having taken nine points from seven games so far this campaign - but they have relinquished eight from winning positions.

And manager Guy Whittingham revealed that during the week running up to their game at the Pirelli Stadium, they worked on holding on when in leading positions during training.

"We've done a lot of hard work in the week on how to protect leads, and I think we did it very well," he said.

"It [Burton] was probably the game where we created the least amount of chances so far, but that's the balance we are looking for, where you create chances, score goals and make sure you're hard to beat."