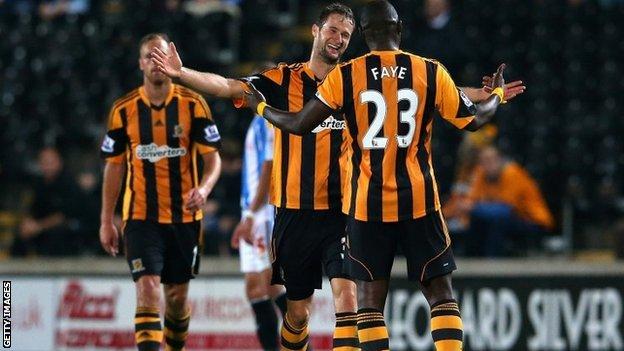 Nick Proschwitz scored the only goal as Premier League side Hull beat Huddersfield in the League Cup.

His eight-yard finish in the second half was enough for Hull in a low-key third-round tie.

The German squandered a chance to double his tally when he failed to punish Huddersfield goalkeeper Alex Smithies for a misplaced pass.

Oscar Gobern headed over for the visitors as a turgid game petered out at the KC Stadium.

Hull had lost just once at home in six previous meetings against fellow Yorkshire side Huddersfield and Steve Bruce's men extended that impressive record against a Championship side which seemed to have the cup low on their list of priorities.

With 19 changes across both starting line-ups it was perhaps unsurprising that neither side shone.

Hull were the better side and dominated possession. In the first half Matty Fryatt went closest to breaking the deadlock when he hit the woodwork.

On the hour, however, Proschwitz pounced on George Boyd's cross to powerfully score from close range for his first goal of the season.

"It was a comfortable evening for us but it was like watching paint dry.

"But that's what the early rounds of the cup have turned into now. It's a shame but there you have it."

"I wanted to go through, but needs must. It [the team selection] is no disrespect to the cup, it's a necessity.

"Our priority is staying in the Championship. We have two games in a very short space of time. We recover on Wednesday, prepare on Thursday and play on Friday.

"I'm disappointed. I wanted to win and we might have won if we'd been at our best."