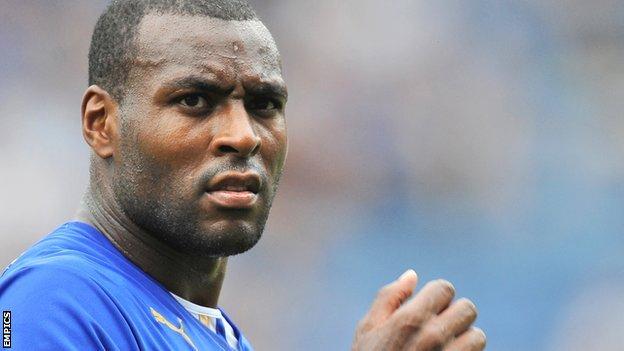 Leicester City captain Wes Morgan insists he is happy at the club and would like a new deal when his current contract expires in the summer of 2014.

The defender's former club Nottingham Forest made at least two bids to sign him in the summer transfer window.

But Morgan told BBC Radio Leicester: "The window is closed now so there will be no more speculation.

The other Big Wes

A man from the US become a cult figure for Nottingham Forest fans because he shared Wes Morgan's nickname and used it as a Twitter handle.

Internet developer Wes Hall, who uses @BigWes on Twitter, had messages congratulating him on his 400th appearance for Nottingham Forest in November 2011.

"I'm happy. The the manager has shown me nothing but love. It would be nice to be offered a contract."

Morgan added: "There was a lot of speculation. But I am just here to focus on my job and do what I do best which is play football for this club. I can just concentrate on my football."

Forest were understood to have offered about £1.5m to re-sign the defender they sold to the Foxes in January 2012.

But City boss Nigel Pearson has always maintained his stance that Morgan was not for sale and would like him to extend his stay.

"It's good if the players are saying the right thing at the right time," Pearson said. "Our skipper is very, very important to us so hopefully we can do something there [about a new contract]."