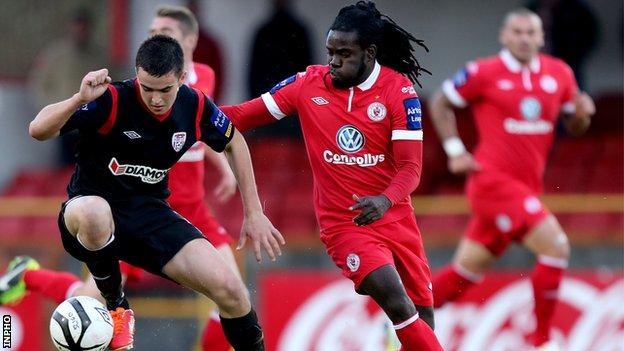 Derry City boss Declan Devine says his players' Brandywell futures are at stake as they chase a spot in next season's Europa League.

Devine, who guided City to cup glory last year, feels they can seal a place in Europe through their league placing.

"There are plenty of points up for grabs - we can push on," said Devine.

"The main aim now is to qualify for Europe.

"The players are playing for contracts and their futures at the club. They need to continue to show desire and hunger."

Derry made their cup exit at a storm-lashed Showgrounds, despite a late push in an attempt to force a replay.

Raffaele Cretaro's 15th-minute goal proved enough for Sligo who are in with a chance of the league and cup double.

"To be honest, I am absolutely devastated," said Devine.

"When the draw was made, I felt if we could get to the semi-finals there would be two teams there lower than us in the league. But it was not to be.

"You make your own luck in football and you cannot afford to switch on and off against a team like Sligo.

"We gave everything - but you get punished at this level if you make an individual mistake."

Derry are at home to Bray Wanderers in the Premier Division this Friday.

A poor run of results has seen Derry slip out of title contention and they are eight points behind third-placed Sligo, but with a game in hand.