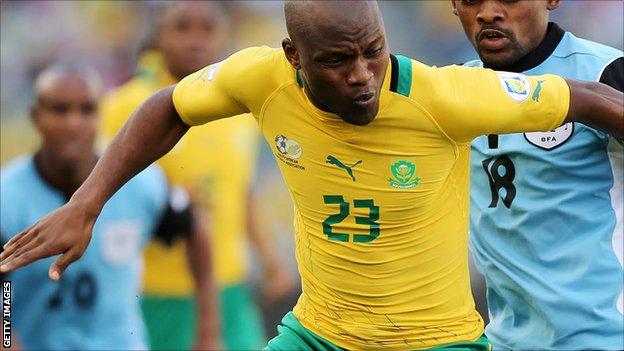 Bournemouth striker Tokelo Rantie insists he can cope with the pressure of being the club's record signing.

He has yet to make his debut, but says he is relishing the challenge ahead.

"The only thing that will make me not feel pressure is to do well on the field," he told BBC Radio Solent. "I'm looking forward to it, it is going to be tough, but I believe I am ready."

When I was in South Africa for the Cup of Nations, Tokelo Rantie was becoming a cult hero

Rantie regards his move to Bournemouth to play in English football's second tier as a "dream".

He explained: "Being part of English football and to be given the opportunity is going to be something that will be with me for the rest of my life.

"[I want to] Make sure I leave a mark and show what South African football is all about."

Rantie has already been impressed by Cherries manager Eddie Howe, who he believes can turn him into a better player.

"The first time I met the coach he told me exactly what he wanted to do with me and I couldn't believe it," he said.

"He told me how he wanted to use me and that he wanted me to be part of this group. It's something that gives you a boost and the power to show people what you are capable of and I was very happy to hear those words from him.

"He is a good coach, you can see a good coach from a long way and I think as much as he is young he has good football brains and can make me a better player."

The forward, who describes himself as "explosive", said he was also determined to repay the faith shown in him already by his new team-mates at the Goldsands Stadium.

He added: "From the first time I went into the dressing room everyone shook my hand and I felt at home. I just pray I do not disappoint them."