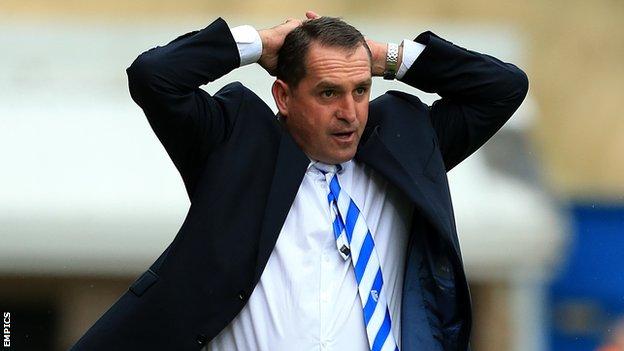 Gillingham manager Martin Allen believes their current performances demonstrate that his side will be able to climb the League One table.

The Gills are yet to win a game this season following their 2-1 defeat away to Coventry on Sunday.

"We were much more focused and concentrated. If they keep playing like that they will be fine," he told BBC Radio Kent.

"These performances will turn into wins. There is no doubt about that."

He added: "Things have had to improve and they acquitted themselves well.

"I wouldn't say it's back to the drawing board because I thought it was a good performance.

"The players have given everything they have got. We are exhausted after that performance against Coventry."

Gillingham remain in the bottom four after losing at Sixfields - a result Allen described as "hard to take".

"The players put in a fantastic performance and we had a gameplan to go out and frustrate them," he said.

"We knew the areas where they were weak and exploited them. We didn't turn the chances we had into goals - we should have been well ahead at one stage.

"To lose to a set-piece late on was disappointing.

"I thought the players were terrific. We had good pace, tenacity and organisation in our team.

"Tactically we got it right."