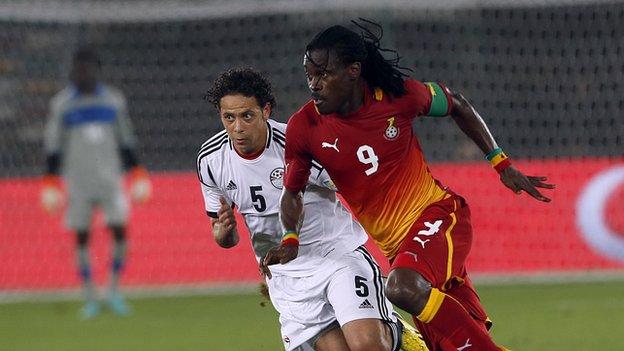 Ghana will play Egypt in the pick of the ties in the 2014 World Cup play-offs which decide who reaches Brazil.

Egypt, the only side on the continent to have a 100% record in qualifying, were the one non-seeded team all the seeds would have hoped to avoid.

African champions Nigeria were drawn against the lowest ranked side Ethiopia, while top ranked side Ivory Coast were paired with Senegal.

Tunisia, who qualified after Cape Verde were docked points, will face Cameroon.

And Burkina Faso, runners-up at the 2013 Africa Cup of Nations, will take on Algeria.

The first legs of the ties will played between 11 and 15 October, with the return legs taking place between 15-19 November.

Football's world governing body Fifa has asked for the countries to nominate the day of the ties, venues and kick-offs by Friday.

While Ghana may feel unlucky to have been drawn against Africa's top performers in qualifying, they may take some confidence from the sides' last meeting - a 3-0 win for the Black Stars in a friendly in Abu Dhabi in January.

And it is unclear whether Egypt will play their home game in Cairo while there continues to be political and social unrest in the country.

Recent Egypt internationals have been played in the Red Sea resort of El Gouna, in a stadium that has an all-seated capacity of only 12,000.

It will be interesting to see whether the authorities sanction the use of the Cairo International Stadium, which has an all-seated capacity of 75,00, for what is likely to be a crucial second leg - and where home advantage could be key for Egypt.

Regardless of venue Ghana will be expecting a very tough tie against the Pharaohs, who won all six of their Group G matches.

Egypt coach Bob Bradley said: "We are the strongest team in the group. We are not afraid of confronting Ghana."

Tunisia will be hoping Cameroon fail to resolve an issue with star striker Samuel Eto'o who refuses to clarify whether he has quit international football.

The Indomitable Lions would be a weaker team without the 32-year-old Chelsea man - but Tunisia have a big issue of their own to address, as they are currently without a coach.

Nabil Maaloul resigned after Tunisia's 2-0 defeat to Cape Verde in their final Group B match, believing the team to have been eliminated from qualification.

It was only later that Fifa ruled Cape Verde had fielded an ineligible player and overturned the result to award Tunisia a 3-0 victory that sent them through to the play-offs.

Ivory Coast's meeting with Senegal will be their first since the pair faced each other in an African Nations Cup qualifier in Dakar in October 2012 that had to be abandoned with about 15 minutes to play when Senegal fans rioted after their team went 2-0 down.

The result eventually stood with Ivory Coast claiming a 6-2 aggregate victory and Senegal were banned from playing at their national stadium, Leopold Sedar Senghor, for one year.

Senegal played their last two 'home' matches in Morocco and Guinea and the Confederation of African Football has confirmed their suspension will still be in place when they hosts the Ivorians in November.

Caf stated on its website that the Senegal Football Federation was notified of the one-year ban on 27 November 2012 and it took effect from that date.