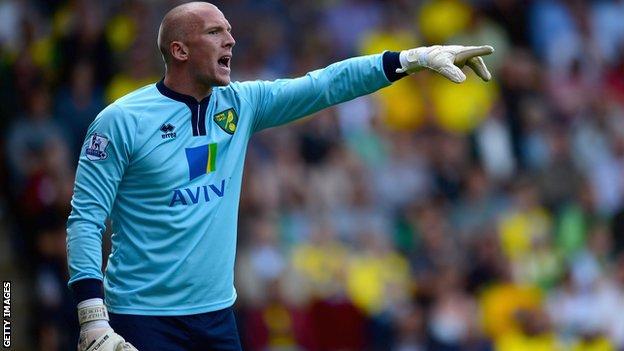 Norwich goalkeeper John Ruddy says his side have enough quality in their squad to take a more attacking approach.

In the Canaries had only 32% possession and four shots to Spurs' 23.

The players we've got now, I just think we can be a bit more aggressive in our play

"It's all well and good camping outside your box absorbing pressure but by the end you're so tired you can't create anything," he told BBC Radio Norfolk.

"Good teams find a way through. We need to believe that we're good enough to give them something to worry about."

Last season was Chris Hughton's first as Norwich boss and he led the side to 11th place in the Premier League and eight points clear of the relegation zone.

But only Stoke and QPR scored fewer goals as the Norfolk side hit the net just 41 times, 11 less than their previous campaign when Paul Lambert was in charge.

"The players we've got and the signings we've made I just think we can be a bit more aggressive in our play and really ask questions of other teams as opposed to making them ask all the questions of us," Ruddy continued.

"The lads are putting in an unbelievable shift defensively but we need to be more positive. We're a good group of players and that believe in each other but we need to put that belief out on the pitch at matches."