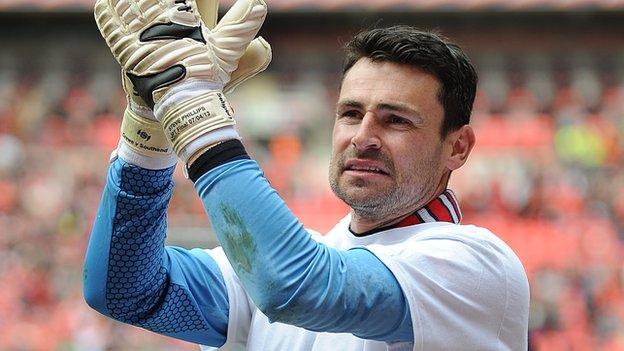 Crewe Alexandra keeper Steve Phillips says it is time for his team to stand up and be counted following their poor start to the season.

Saturday's 3-0 home defeat against Walsall sent the Alex to within a point of the relegation zone.

"We'll see who comes to the top and see who sinks. I certainly won't sink," Phillips told BBC Radio Stoke.

"I'm a fighter and I'm hoping there's a few behind me who are with us. If you don't you're going to get relegated."

Against a Walsall side that had not won in more than a month, Saturday's game at Gresty Road looked destined for a draw until Crewe were stunned by three goals in the final 24 minutes.

"To go down with a whimper like we did was nothing short of scandalous," said Phillips

"You need fighters in your team. That was by no means good enough."

The loss followed the 5-0 hammering at Swindon a fortnight ago, after which boss Steve Davis publicly outlined his concerns over 'disruptive' elements within the dressing room.

Phillips added: "We did a bit of digging out before the Peterborough game. We said we need a team of winners not losers.

"But, unfortunately, almost straightaway, it's crept back in. We need another row like we did before the Peterborough game.

"There's a bit of soul searching to do. There's a weak streak somewhere. This needs sorting quickly."

Plagued by problems on and off the pitch, Davis' side have take only one point from their last four league matches.

"We've had a very long honeymoon period. Now's the time when we've just got to dig deeper and work harder."