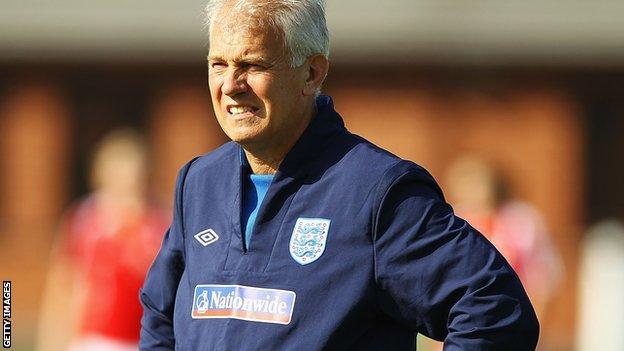 Brent Hills is hopeful that the role he has played in developing England's players will help him become the next manager of the women's national team.

The Under-23 coach has taken charge of the side on an interim basis following the sacking of Hope Powell in August.

The Football Association is due to name Powell's successor in October.

"I have applied for the job and I've had an ideal apprenticeship working not only with the seniors but also the Under-23s," said Hills.

"Of the 35 players who were in the long squad for our Euro 2013 selection, 29 had come through the Under-23s. So I feel that I've played a part in the development of most of our current crop of internationals."

Hills, who had been Powell's assistant since 2002, will be in charge of the side for two World Cup qualifiers: Saturday's game against Belarus at Bournemouth and the tie with Turkey at Portsmouth five days later.

The FA is then expected to appoint a permanent coach before England's World Cup qualifier against Wales at Millwall on Saturday, 26 October, the day of the FA's 150th anniversary.

It was the failure of the Euro 2013 squad, whose worst major tournament performance since 2001 saw them finish bottom of their group in Sweden, that led to Powell's dismissal.

But Hills, like Powell a Uefa pro licence holder, insisted: "The players are much better than they showed at the Euros.

"We severely underperformed as a group and the players are still hurting from the experience. But they can't wait to get out there against Belarus and show the quality they've produced so often in the past."

Hills has named a similar squad to the one that contested the Euro finals, adding strikers Natasha Dowie and Danielle Carter.

Liverpool's Dowie, who hit her 18th goal of the season in last Thursday's 4-2 Women's Super League win against Everton, will almost certainly be in the starting line-up as England look for a convincing win against Belarus.

Comfortable victories both on Saturday and the following Thursday should be on the cards for Hills' team.

England have slipped to 11th in the world rankings since the Euro finals but they are still ranked a long way above Belarus (38th) and Turkey (65th).

"These two games are banana skins waiting to happen," said Hills. "But if we play to the levels we've demonstrated in the past we should get the results we want."