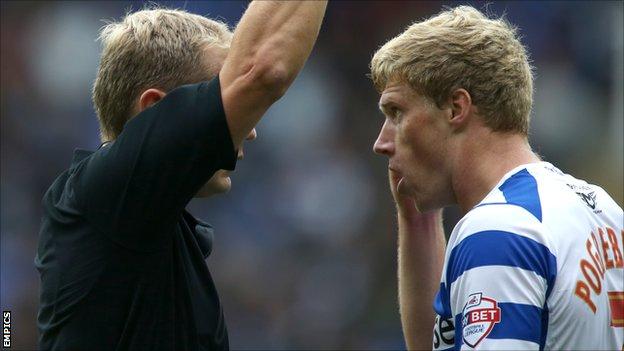 Reading duo Chris Gunter and Jason Roberts have defended striker Pavel Pogrebnyak after he was sent off for diving on Sunday.

The Russian, who was making his first start of the season, was given a second yellow for throwing himself to the ground while battling for possession.

"It didn't look like he dived, more like he just fell over," Gunter told BBC Radio Berkshire.

Roberts added: "I thought it was a little bit harsh."

For big Pav it was a fresh start. It is fair to say things haven't been fantastic for him since I've been at the club, things haven't gone well for him

Pogrebnyak was handed his first start of the season after a meeting with manager Nigel Adkins to clarify his future at the club.

But it was a far from memorable return. After being shown a yellow card for a foul on Kazenga LuaLua, he was sent off for diving after 30 minutes when he exaggerated a fall to the ground while challenging for the ball with Brighton's Keith Andrews - who was pulling the Russian on the arm.

"There can be a thing of going to ground without it being a foul or a dive," added Gunter.

Injured Roberts, who was working at the game as a summariser for television, told BBC Radio Berkshire after the match that the referee had made it difficult for himself.

"The referee set himself a very high bar and it seemed like every foul was a yellow," said Roberts. "Having said that, he's given him a decision to make."

Adkins was disappointed Pogrebnyak could not take the opportunity he had been given to impress after a year of frustration at the club.

"I'm not going to to get involved (in the red card)," Adkins told BBC Radio Berkshire.

"For big Pav it was a fresh start. It is fair to say things haven't been fantastic for him since I've been at the club, things haven't gone well for him.

"But he has trained ever so well and we were looking for him to do well and unfortunately from our point of view he's off the pitch."