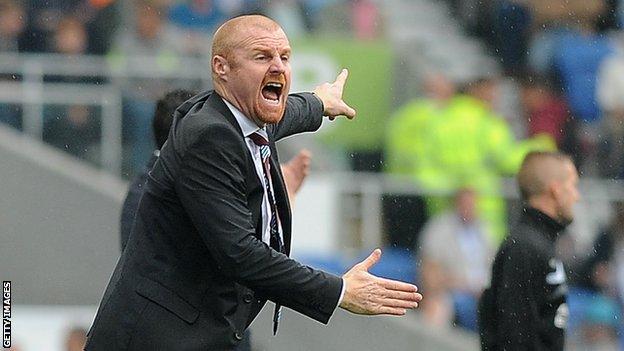 Burnley manager Sean Dyche says his side's performance in proves they are bridging the gap to their local rivals.

Since Rovers were relegated in 2012, all three meetings between the two clubs have ended in stalemate.

"But when you look at the gap between the quality of the sides, I think so."

The 42-year-old continued: "Most neutrals would be amazed how we haven't won any of the three games we've had against them. There will be another day - it's 9 March [the date of the return fixture at Ewood Park]."

In the last three East Lancashire derbies between Blackburn Rovers and Burnley, a total of six goals have been scored.

Five of those goals have come in the second half and three of them in the last five minutes.

Burnley were just five minutes away from notching their first victory over Blackburn since 1979 courtesy of a stunning strike from winger Junior Stanislas, but an equaliser from Jordan Rhodes ensured their 34-year wait for a win over Rovers goes on.

"I think most of our fans will be disappointed not to beat Blackburn because of the history," added Dyche.

"But in reality, from where we were at the end of the season and then with - we're in good shape, with good points in the table and for what we're trying to do here."

Scotland international Rhodes netted his fifth goal in three Championship matches to earn a point for Rovers and admitted afterwards he was well aware that losing at Turf Moor would damage Rovers' proud history in the fixture over the past three decades.

The 23-year-old, who cost Rovers £8m from Huddersfield in August 2012, said: "We know the record and I was one of them that was dreading [defeat] because the clock was ticking.

"I know it was a scrappy goal but fortunately it went in and we live to tell the tale.

"It wasn't a great spectacle and the first goal in these games is always pivotal. For us to come away with a result, having been 1-0 down with five minutes to go, we'll take that and move on."