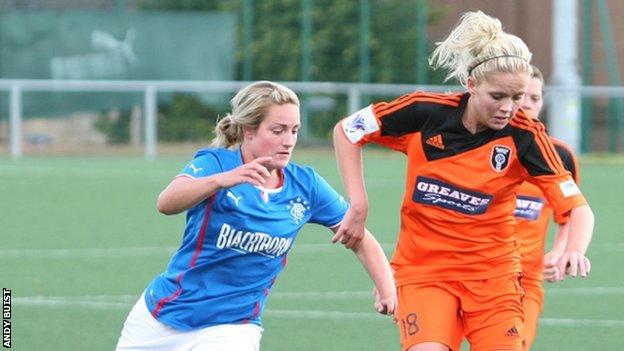 Glasgow City's goalless draw with Rangers means they will have to wait until the end of September before trying to win the Premier League title.

Sunday's match was played in horrendous weather conditions at Petershill Park and leaves City 11 points clear of Hibernian with four games to go.

Elsewhere in the top six, Hibs won 3-2 away to Aberdeen, while Celtic and third-placed Spartans drew 1-1.

Howling wind and intermittent torrential rain and hail meant there was little in the way of flowing football in the City-Rangers derby.

Indeed, the wind was so strong that the goalkeepers struggled to kick the ball further than 20 yards.

In Hibs' win at Aberdeen, Lizzie Arnott got a double with full back Kirsty Smith also got on the scoresheet for the visitors, and Christie Grimshaw and Chloe Fitzpatrick were on target for the Dons.

Fifth-placed Celtic took the lead against Spartans thanks to a Chloe Craig opener but the Edinburgh side hit back through Lana Clelland for a point at Ainslie Park.

In the bottom six, Kilwinning's home match against basement side Falkirk was called off because of the weather to leave the relegation battle open for a little while longer.

Hamilton got a last-gasp winner through Carolina Richardson as they defeated Buchan 2-1 with on-loan Glasgow City midfielder Lauren McMurchie putting them ahead in the first half and Hannah Stewart netting from the penalty spot for Buchan.

Forfar maintained their good form since the break, defeating Hutchison Vale 4-2. Hutchie found the back of the net through Tracy Donachie and Michelle Russell. Forfar's goals came courtesy of an own goal from the home side and strikes from Caroline Heron, Abi Grant and Julia Scott.

The international break now means that the SWPL won't resume until Sunday 29 September as Scotland prepare to face the Faroe Islands and then Bosnia-Herzegovina in their opener World Cup Qualifiers for Canada 2015.