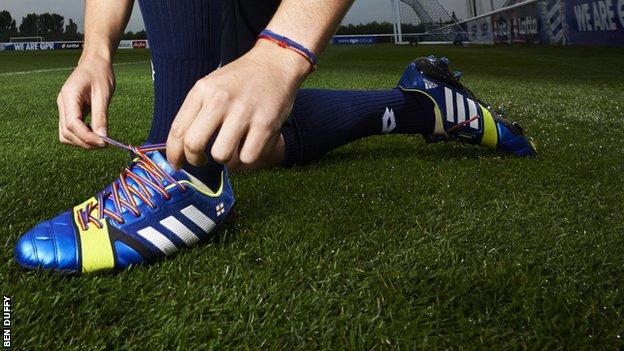 Footballers in England and Scotland have been invited to support a campaign addressing homophobia by wearing rainbow laces in their boots.

Laces have been sent to all 92 Premier League and Football League clubs, plus the 42 professional teams in Scotland, by gay rights charity Stonewall.

The Right Behind Gay Footballers campaign wants players to wear the laces in games on 21 and 22 September.

Its focus is on changing attitudes rather than urging players to come out.

Stonewall deputy chief executive Laura Doughty said: "It's time for football clubs and players to step up and make a visible stand against homophobia in our national game.

"By wearing rainbow laces, players will send a message of support to gay players and can begin to drag football into the 21st Century."

In February, the Football Association issued a toolkit to clubs to help combat homophobia in the game.

But, a month later, only 29 of 92 professional clubs in England were actively engaged in the Football v Homophobia campaign.

There are no known openly gay footballers in the English and Scottish professional leagues.

However, QPR midfielder Joey Barton is backing the campaign, appearing in promotional material and taking to Twitter to push the cause.

He wrote: "Join the rainbow laces movement. Sexuality in sport should not be an issue in the 21st century."

Former Leeds and United States winger Robbie Rogers announced he was gay earlier this year but only after retiring, claiming he could not have continued his career because of the "pack mentality" that affects the way footballers behave.

He later reversed his decision to quit the game and signed for LA Galaxy.

Before the American's revelation, only two footballers had publicly said they were gay.

In 1990, former England Under-21 international Justin Fashanu became the first professional footballer in Britain to come out. He took his own life eight years later, aged 37.

Swedish lower league player Anton Hysen, the son of former Liverpool defender Glenn Hysen, also came out in an interview with a Swedish football magazine in 2011.