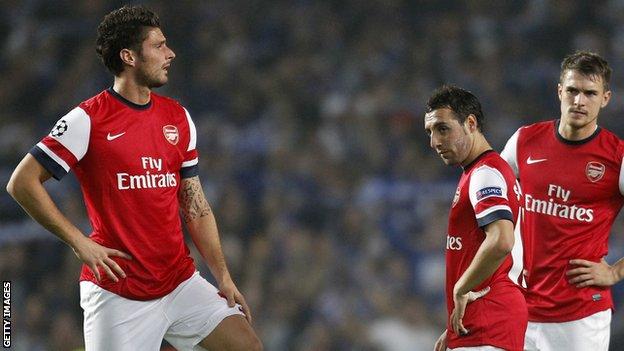 Arsenal are waiting to learn the extent of a knee injury suffered by striker Olivier Giroud on Saturday, while midfielder Santi Cazorla faces a few weeks out because of an ankle problem.

The France striker was substituted late in the 3-1 win against Sunderland after appearing to hurt himself while trying to connect with an Aaron Ramsey cross.

"He is the player at the moment that would be very difficult [to replace]," admitted Gunners boss Arsene Wenger.

Cazorla was not in Saturday's squad.

Giroud's injury may not be too serious, however, with the 26-year-old tweeting: "My knee is ok don't worry! Thanks for your support!"

The loss of the 6ft 3in Frenchman for any length of time would be a blow for the Premier League leaders, who were linked this summer with strikers Luis Suarez from Liverpool, and Gonzalo Higuain, who instead joined Rafael Benitez's Napoli.

Giroud has started the season in fine form, however, scoring in each of Arsenal's four league games.

Wenger added: "I'm extremely happy with him. Not only because he scored [against Sunderland], but his overall link play is improving from game to game.

"I think he is becoming a very important player for us."

On Cazorla's injury, Wenger added: "He has an ankle problem and he will be out for a few weeks as well.

"I don't think he will play before the next international break."

The next round of European World Cup qualifiers is on 11 October.

Giroud and Cazorla are the latest injury concerns for the Gunners. Lukas Podolski and Abou Diaby are both out with long-term injuries while Tomas Rosicky missed the game against Sunderland with a hamstring injury.