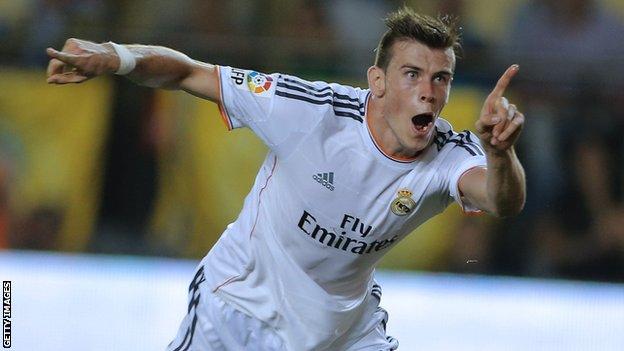 World record signing Gareth Bale said he was "proud" of scoring on his Real Madrid debut as the Spanish giants drew 2-2 at La Liga rivals Villarreal.

The Welshman, 24, netted a 38th-minute tap-in before being replaced by Angel Di Maria after 62 minutes.

"Proud to score on my debut and pleased to get 60 minutes, just disappointed not to get the result," the ex-Tottenham forward said.

It was Bale's first start of the season following a recent foot injury.

The former Southampton trainee, who completed his £85m move to the Bernabeu on 1 September, started on the right of a three-pronged attacking midfield, alongside Portuguese superstar Cristiano Ronaldo and recent £23m signing Isco.

After Cani had given hosts Villarreal a deserved lead, Bale put the away side level when he slid in to convert Daniel Carvajal's right-wing cross from inside the six-yard box.

He almost scored another at the start of the second half when his fierce long-range shot flew over the Villarreal crossbar, before he was replaced by Argentina winger Di Maria shortly after.

Ronaldo then put Real ahead, but Giovani Dos Santos, a former team-mate of Bale's at Tottenham, denied him a winning start with a 70th-minute equaliser.

"I think he (Bale) is happy to score his first goal for Real Madrid. He played in a difficult match and he played well, showing his good attitude," said the Italian.

Bale added he was now "looking forward" to making his Champions League debut for the nine-time European champions.

He has been named in Ancelotti's 20-man squad for Tuesday's Group B trip to Turkish champions Galatasaray.