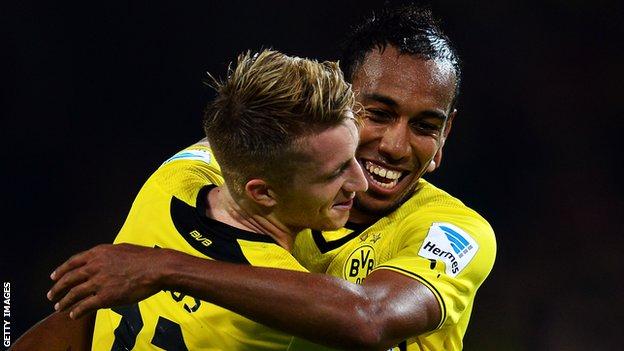 Borussia Dortmund thrashed Hamburg 6-2 to return to the top of the Bundesliga after Bayern Munich beat Hannover 2-0.

Two goals apiece from Pierre-Emerick Aubameyang and Robert Lewandoswki helped Dortmund to their fifth win in as many league matches, despite seeing an early 2-0 lead cancelled out.

Former Chelsea winger Arjen Robben was involved in both of his side's goals.

The Dutchman sent Toni Kroos through on the left to cross for Mandzukic to score, then forced Ron-Robert Zieler into a save which fell nicely for Ribery to tuck home.

Unbeaten Bayern have now won four of their first five Bundesliga matches under Pep Guardiola, but Dortmund have a 100% record after an ultimately comfortable win over Hamburg.

Hamburg defender Lam Zhi-Gin pulled one back with a curling shot inside the far post, and Heiko Westermann levelled just after the break.

Reus fired to the far corner a minute later to extend the lead before Nuri Sahin crossed for Lewandowski to wrap up the win with an 81st-minute header.