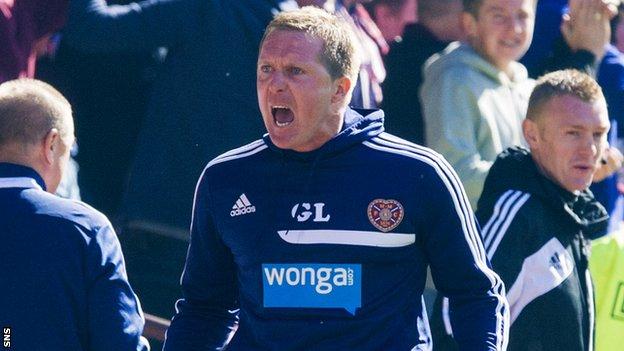 Hearts manager Gary Locke said his side were hobbled in their 3-1 defeat by Celtic at Tynecastle due to an unfair penalty decision.

"I think there was only one man in the stadium who thought it was a penalty," said Locke.

"But unfortunately for us, it was the most important one."

Jason Holt's low drive levelled the game in Edinburgh 13 minutes into the second-half, after Stokes had opened the scoring.

However, Stokes fired Celtic back in front then set up Teemu Pukki for a headed third on his debut from the bench.

From television evidence, there was no doubt that Hamill's arm struck the ball, but Locke insisted no-one on the pitch even noticed the incident.

"It didn't help with the decision we got against us," said Locke. "But it was always going to be a tall order against a team full of international stars.

"I've been in the game a long time and you can tell the decision by the reaction of the opposing team - and there wasn't any players on the pitch or in their dugout appealing for it, but we got one against us.

"It's another harsh decision we've had, but they say over the course of a season these things even themselves out, so I hope they do that."

Locke said he had not made any attempt to obtain an explanation for awarding the decision from match referee Willie Colum.

"There's no point," said Locke. "He gave it, there's nothing you can do - you're not going to change his mind or his decision.

"You just have to accept it, which is one of the most galling things."

Despite the defeat, Locke took some confidence from the performance of his young squad and said he continues to believe Hearts will remain in the top-flight at the end of the season.

"We're not going to stay up by winning games against Celtic," said Locke.

"It's the games against clubs around us where we have to pick up points. It was always going to be a big ask today, but I thought we acquitted ourselves well."