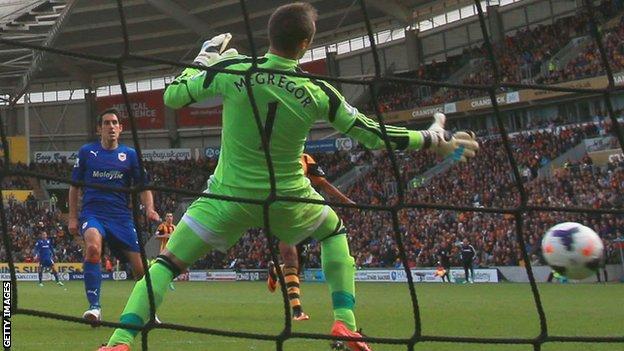 Midfielder Peter Whittingham has praised the way Cardiff City have recovered after losing their opening game in the Premier League.

The Bluebirds lost 2-0 at West Ham on the opening day, but have picked up five points in four games since, including a win over Manchester City.

Whittingham scored in the 1-1 draw at Hull, and was satisfied with the point.

"We went 1-0 down but we didn't let that hamper us, I think we've acquitted ourselves well," he said.

The former England under-21 international says five points is a good return for the newly-promoted Welsh club after their faltering start at Upton Park.

"I think it is after losing out first game of the season against West Ham," he added.

"It was always going to be hard for us with Man City and Everton after that.

"If you go through a run of games when you're not getting any points on the board then you start to get a little bit worried, but we've done well and we're happy with the point [at Hull] and we just need to carry on from here."

Cardiff trailed 1-0 at half time against Hull after Curtis Davies had headed Hull into the lead.

But Whittingham's sweet left-footed volley after a sweeping move opened his account in the Premier League, and met with the whole-hearted approval of manager Malky Mackay.

"I'm proud of the way the team came from behind and the quality of the goal," said the Scotsman.

"That was a really beautiful goal.

"We scored a really good goal a couple of weeks ago against Manchester City - 17 passes - but today there's four of our guys have taken the ball from our 18 yard box to the goal without Hull touching the ball and it was a fantastic goal.