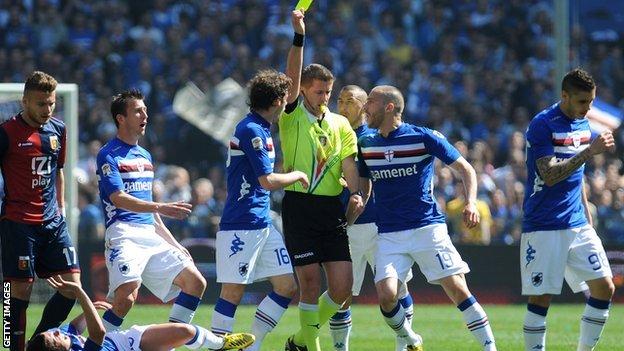 Italian side Genoa have suspended a coach after he was found hiding in bushes spying on a training session held by local rivals Sampdoria.

Youth-team coach Luca De Pra is believed to have watched Sampdoria train from under a tree while dressed in camouflage gear, without the knowledge of his own club.

Sampdoria said in a statement De Pra was hiding "like Rambo under a tree".

Like Rambo hidden among the branches on the hill, Luca De Pra failed to overcome Sampdoria's intelligence and counter-intelligence operations

The teams meet at their shared Stadio Luigi Ferraris ground on Sunday.

"No director or member of the coaching staff sent Luca De Pra, goalkeeper coach for the youth team, to watch the training session at Bogliasco. It was a personal initiative," Genoa said in a statement on their website.

"This has never been done before and is not part of the club's modus operandi. The club makes it known that De Pra has been suspended with immediate effect pending further explanations."

De Pra, who is grandson of former Genoa goalkeeper Giovanni De Pra, was chased by Sampdoria club officials after he was spotted.

Delio Rossi's side, who returned to the top flight last season and got the better of Genoa with a win and a draw in two meetings, released a tongue-in-cheek statement on their website in response to the incident.

It read: "That the derby is a question of nerve, tactics and strategy we already knew, but frankly we could never expect that it could turn into a scene of espionage.

"Like Rambo hidden among the branches on the hill, Luca De Pra failed to overcome Sampdoria's intelligence and counter-intelligence operations.

"However, no prisoners were taken and no blood was shed. Once tracked down and caught red-handed, the opposing side's soldier was let free to return to base.

"You should always forgive your enemies, as nothing annoys them more."