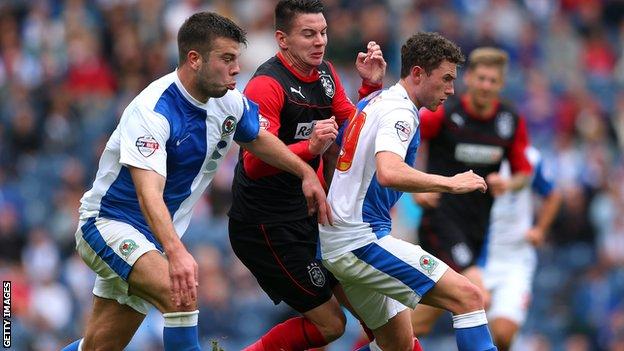 Blackburn's winless run was extended to three games as they were held to a goalless draw by Huddersfield.

The game featured the two top scorers in the Championship - Blackburn's Jordan Rhodes and Huddersfield's James Vaughan - but both players were kept largely kept quiet throughout.

Rhodes had the home side's best chance but he headed over when unmarked against his former club.

Adam Hammill went closest for Huddersfield but his header was saved.

Huddersfield, now unbeaten in three, are ninth with 12 points from eight games while Rovers are 14th with nine.

The visitors, without a win at Ewood Park since 1986, started with plenty of vigour. Jazz Richards fed Hammill but the midfielder shot wide and Vaughan, searching for his 10th goal of the season, saw a header cannon back off the crossbar, with the flag already raised for offside.

Tommy Spurr and Scott Dann both shot over for the hosts and Rhodes should have done better when he was unmarked inside the area, but the striker headed over from Tom Cairney's inviting cross.

A draw looked increasingly likely as the second half progressed with few notable chances.

Blackburn's Chris Taylor had the brightest moment of the later stages, surging into the area from the right, but sent his lobbed effort just over.

"I'm happy with the clean sheet because it's our first of the season and that was against the leading goalscorer in the Championship, which was a positive for us.

"But at the other end I think for long spells we dominated the game in terms of possession. Crosses and shots stats weigh heavily in our favour but we haven't been cute enough in the final third.

"If you look at the game itself, Huddersfield changed their formation four times so that's a massive compliment to us and the air of disappointment around the place shows how far we've come so quickly with this young team."

"You wouldn't have bet on a 0-0 but we've got one and the reason for that was because we allowed them to play in the first half but didn't allow it in the second and created the better opportunities.

"We came here last year and got nothing. They're a strong outfit, have a decent squad and I'm pleased with the point.

"It was one of those games where had we upped our tempo five per cent we would have won the game. Had they done the same, they may have done so. It was a little bit of a stalemate."