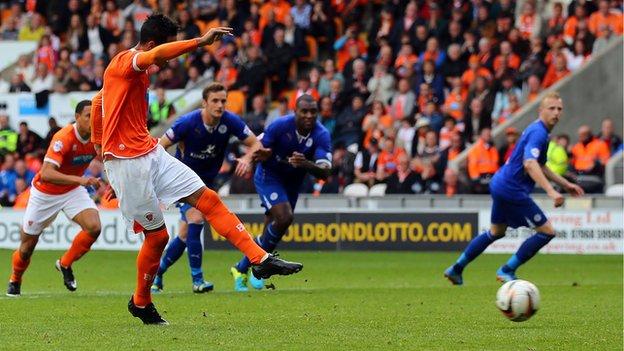 An injury-time penalty from Thomas Ince salvaged a draw for Blackpool and saw Leicester City slip out of the Championship's top two.

Blackpool responded to defeat at Millwall on Tuesday well, with Chris Basham's header giving them the lead.

A Paul Konchesky penalty and a stunning long-range Andy King strike in the space of two second-half minutes reversed the scoreline.

Blackpool's defeat at Millwall saw them fall from top-spot in midweek, but Paul Ince's side had not suffered back-to-back defeats since February.

Their bid to continue that run started well, when Basham headed in Ricardo Fuller's cross inside the opening quarter.

Leicester, second in the table before the trip to Bloomfield Road, replied with an Anthony Knockaert drive which was deflected wide.

The two sides traded blows throughout the opening half, with Basham twice shooting over from range and Leicester striker David Nugent shooting wide from 20 yards on the stroke of half-time.

Leicester, who gave former Blackpool striker Gary Taylor-Fletcher a debut following his signing on Friday, showed grit in the second period and should have equalised when Jamie Vardy side-footed wide on 55 minutes.

The former Fleetwood striker made amends for his miss on 72 minutes when he was brought down in the box, allowing Konchesky to score the first away goal at Bloomfield Road this season.

Within two minutes, Nigel Pearson's side had turned the game on its head, King letting fly from 30 yards, past the dive of Matt Gilks and into the top-left corner of the net.

But the hosts regained the initiative and pressed for an equaliser, which was presented to them when Ince converted following Schmeichel's clumsy foul on Mackenzie.