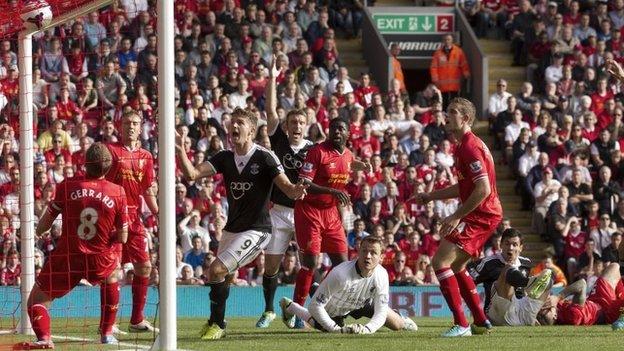 The Croat might have conceded a penalty for a challenge on Reds striker Daniel Sturridge in the first half.

But early in the second half he held off Daniel Agger to steer in a header from Adam Lallana's corner.

Liverpool struggled to create chances as the visitors easily held on for a second league win of the season.

Saints had been the last team to beat Liverpool in the league - a 3-1 win at St Mary's in March - and the relative comfort with which they repeated the feat provided a reality check for the Merseyside club after a promising start to their campaign.

Southampton manager Mauricio Pochettino had highlighted the importance of cutting off the supply to the prolific Sturridge - a scorer in his side's previous five games - and while the visitors were assisted by the absence of the Reds' injured Brazilian playmaker Philippe Coutinho, they stuck meticulously to their manager's plan.

Even so, Liverpool were the first to go close, Steven Gerrard's 25-yard free-kick being palmed wide by keeper Artur Boruc at full stretch.

And the home side gradually began to exert some pressure, with Reds forward Iago Aspas releasing Victor Moses, but left-back Luke Shaw intervened with a well-timed tackle as the former Chelsea man prepared to chip the on-rushing Boruc.

"That has to be the best result yet since Mauricio Pochettino took over at Southampton. It is Southampton's third win in last 30 visits to Anfield and came after an accomplished display from them."

The hosts then thought they should have had a penalty when centre-back Lovren appeared to clip Sturridge in the area, before Moses went close when he nutmegged centre-back Jose Fonte, only to see his poked shot saved by Boruc.

But when Reds defender Agger gave the ball away early in the second half - a mistake that saw Lallana played in for an effort that keeper Simon Mignolet had to save - it signalled the start of some sloppy play by Liverpool.

The Reds needlessly conceded a corner and Lovren, who signed for the south coast club from Lyon in the summer, outmuscled Agger to nod Southampton in front.

It very nearly got worse for Liverpool when Shaw, helped by a couple of ricochets, broke through the home defence to produce an impressive save from Mignolet.

The Belgian keeper also kept out a follow-up effort when the ball rebounded off Liverpool defender Mamadou Sakho, then punched away the loose ball before Southampton's Steven Davis could get to it.

The visitors sat back more in the closing stages but comfortably protected their lead to secure a fifth league win in their past seven games against Liverpool, who will now be even more glad to welcome Uruguay striker Luis Suarez back at the end of his 10-game suspension for biting.

"We were very subdued. Technically we were not very good and gave away a poor goal. It is one of the few poor days we have had.

"We just need to recover. We were not so good with the ball and technically nowhere near the level we have been at.

"Luis Suarez being available is a positive as he has now served his ban and we can bring someone as good as him back."

"We are very pleased - the effort the players put in was amazing. We were up against the leaders and I am delighted.

"Overall, we had an amazing game, especially in the second half. It's really good that one of our defenders got on the scoresheet.

"We are just thinking ahead to the next game and nothing else. I've been in football too many years to be carried away."