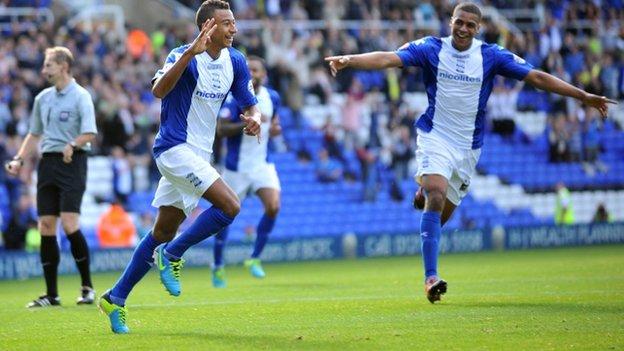 Lingard, 20, had three by half-time and grabbed his first when he tapped in after Chris Burke's shot was saved.

He finished Wade Elliot's pass for his second, before cutting in from the left to add his third and tapping home a Burke cross for his fourth.

Kamil Zayatte pulled one back for Wednesday, who remain without a win.

The heroics of Lingard, who is on a month-long loan, brought to an end a run of four Championship games without a goal for Lee Clark's side and moved them up to 18th in the table.

Clarke gave a start to defender David Murphy, who returned from 10 months out with injury, as the Blues set about securing their second win of the season.

Lingard completed a 13 minute hat-trick as early as the 33rd minute when he fired past Chris Kirkland after drifting in from the left flank.

The midfielder had tormented the visitors throughout the opening half an hour, tapping home a rebound from close range after Burke's shot was parried for his first.

The England Under-21 international followed up with a snap-shot, drawing a good save from Kirkland, before coolly sliding the ball under the keeper for his second after a neat pass from Wade Elliot.

Wednesday gave debuts to Stephen McPhail and former Birmingham defender Roger Johnson, but their misery was compounded within six minutes of the re-start when Lingard profited from a sharp Burke pull-back to fire in a fourth.

Summer signing Zayatte got on the end of McPhail's free-kick to head a consolation for Dave Jones's side, but they now sit just one place above the relegation zone.

"I was a little disappointed because I thought he (Lingard) could have got five!

"It was fantastic for the kid but mainly for the whole team after the poor performance at Burnley last Tuesday.

"It is probably the best we have played this season and probably last season.

"We just have to continue playing to this standard and we will win a lot more games."

"This is probably the worst performance I've seen from a Sheffield Wednesday side.

"The goals we gave away were hard to swallow. I can only apologise to the fans for the performance we put in. The players should go to the fans themselves and apologise.

"We began brightly but we then switched off. You cannot allow him (Lingard) to get on the ball, turn and run at us. For some reason they allowed him too much scope."