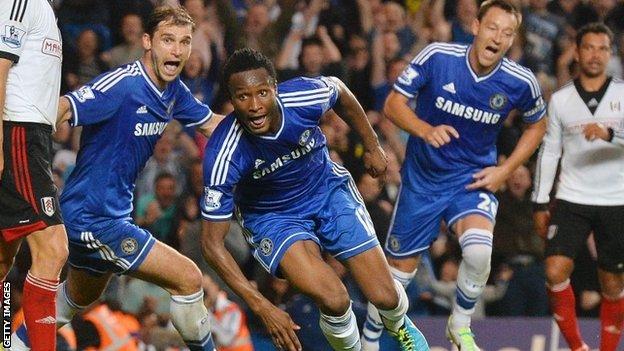 Chelsea rebounded from their worst start to a league season in 10 years by grinding out a victory over Fulham.

Oscar and John Mikel Obi scored second-half goals as the Blues moved top of the Premier League on goal difference.

The visitors created the best chance of a dour first half but Darren Bent shot straight at Blues keeper Petr Cech.

"It wasn't vintage from Chelsea but Jose Mourinho knew the points were what mattered today, and goals from Oscar and John Mikel Obi ensured they went top of the league on goal difference."

Oscar settled Chelsea's nerves with a close-range finish before Mikel hooked in his first league goal in 185 games to end a four-game winless run.

The result took Chelsea above Liverpool at the top of the table, although any one of Arsenal, Tottenham, Manchester City or Manchester United could leapfrog the Blues on Sunday.

Following successive defeats by Everton and Basel, manager Jose Mourinho said he wanted to improve Chelsea's style of play but there was little sign of a dramatic change in an unconvincing performance from the hosts.

With Spanish playmaker Juan Mata not deemed worthy of a place in the Blues squad, there was precious little guile about the home side's attacks, with Eto'o largely ineffective before being replaced by Fernando Torres in the second half.

Chelsea were, nonetheless, deserving winners against a Fulham side that tired in the final half hour and have now not won a match since the first game of the season.

The visitors had held their own in the first half and should have taken the lead when Bent was played through on goal by Pajtim Kasami, only to side-foot his shot tamely at Cech.

On the stroke of half-time, Ivanovic found space for a low shot from the right, which was saved by Fulham keeper David Stockdale with his legs.

With the tension growing in the stands, Oscar delivered the breakthrough the home fans were craving seven minutes after the break.

No outfield player has made more appearances in the Premier League before scoring their first goal than John Obi Mikel.

When David Stockdale failed to hold on to efforts from Andre Schurrle and Eto'o, the Brazilian was on hand to pass the ball into the net from inside the six-yard box.

Fulham came close to an equaliser shortly afterwards when a Kasami free-kick drifted over a crowd of players to Steve Sidwell, who could not direct his far-post header on target.

From then on, the Blues were dominant. They had a penalty appeal turned down by referee Andre Marriner when Ramires went down under a challenge from Fernando Amorebieta before Torres was denied a first league goal of the season when Stockdale tipped his header over the bar.

From the resulting corner, captain John Terry rose highest to nod across goal and the ball bounced up for unlikely goalscorer Mikel to lash home.

"The second half they stepped up a gear, they were more aggressive than us and that is what showed.

"If you play the way we played, you have to create more. We will in the future. We needed a little bit more.