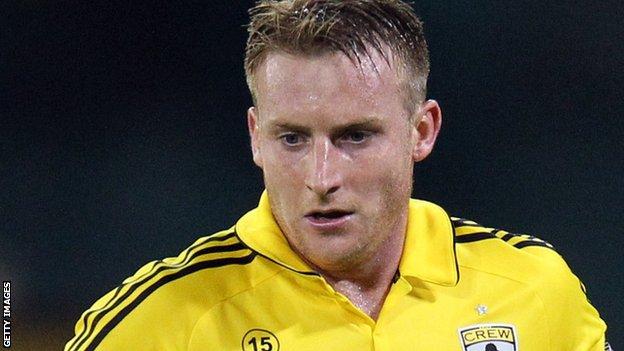 Chris Birchall scored the winner against his old club as Port Vale twice came from behind to beat Coventry City.

Callum Wilson poked home his ninth of the season to put the Sky Blues ahead, before Tom Pope equalised with a header from Chris Lines' free-kick.

The visitors were 2-1 ahead at the break through Franck Moussa's sublime strike into the top corner.

But Doug Loft smashed in to level, and Birchall followed up Ben Williamson's initial shot to give Vale victory.

In the two sides' first meeting since 1964, Vale were the better of the two sides in the second half and, with the score at 2-2, came close when Loft's effort from Williamson's delivery was well saved by Joe Murphy.

Half-time substitute Williamson then rounded Murphy but his tame effort was cleared off the line, before winger Birchall fired home to earn all three points from a thrilling encounter.

"The game unfolded as I thought it would. The front two of Clarke and Wilson are a real handful and I felt we didn't deal with them well enough in the first half.

"Second half, we got closer to them and stopped them from playing, squeezed up the pitch some more - it was like a practice match first half but, in the second half, we got a real response. We put them under pressure and got some decent set-pieces into the box.

"Their strengths are their attacking players and I feel they present chances to you even if they're winning. We were going to get chances in the second half, and luckily we got two."

"We were very compact in the first half, and the complete opposite in the second half. That was extremely disappointing. We were shooting towards our supporters in the second half, so it was a great opportunity to win again on the road.

"All in all over the course of the past two months it's been a terrific effort and we've gone six matches unbeaten, but I'm always one who wants more and so I'm disappointed here.

"We've made huge strides and we have to now focus on improving and if we do that we can have a good season. Setbacks are sometimes good things in general because they're a stark reminder that we're far from being a finished article."