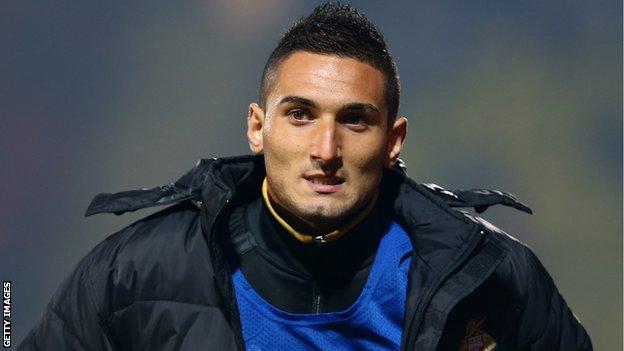 Two goals by Federico Macheda, on loan from Manchester United, were not enough to earn Doncaster victory over Nottingham Forest in the Championship.

The Italian opened the scoring with a low shot before Chris Cohen struck an equaliser from the edge of the box.

Macheda made it 2-1 just after the restart when he headed home a cross from Richie Wellens.

Andy Reid earned Forest a point with nine minutes to go, when his 25-yard drive gave Ross Turnbull no chance.

The point leaves Billy Davies' side sixth, just two points behind second-placed Burnley, while Doncaster slip to 19th with one win and six points from their opening six games.

They came into this clash without a win in their previous four matches but Theo Robinson had already gone close twice and Macheda been denied by Karl Darlow in the Forest goal before the opener came.

Goals no problem for Forest

Nottingham Forest have found the net in all 10 of their league and cup outings this season.

Wellens, who was at the centre of everything for Rovers, created the opener with a superb through-ball through to Robinson who fed Macheda, the 22-year-old finishing in style with a low shot from just inside the box.

The lead lasted just five minutes before Reid cleverly slipped the ball to Cohen for his first goal of the season.

Jack Hobbs cleared off the line from Wellens before Macheda struck again - collecting a booking in the process for his over exuberant celebrations.

But with victory edging closer for the hosts, Forest struck against the run of play when Reid scored his fourth goal in eight league games.