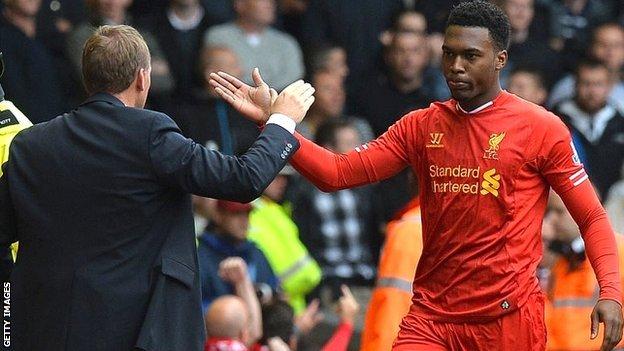 Daniel Sturridge's absence from England's World Cup qualifiers with a thigh strain was legitimate, according to his Liverpool boss Brendan Rodgers.

The 24-year-old striker pulled out of matches against Moldova and Ukraine, but could be fit in time for the league game against Swansea on Monday evening.

"He shouldn't be held as someone who has turned down his country," said Rodgers.

"It was the medical experts who made the decision - it wasn't Daniel."

Sturridge, who has scored five goals in four games for his club this season including winning goals in all three Premier League matches, picked up the injury in but was able to stay on the pitch until the final whistle.

"It will have been nearly a week [since England's second game] and with the injury he had it gives him a chance to play," added Rodgers

"If it was a Saturday game he may well have struggled but that extra bit of time gives him a chance and I would suspect he will hopefully be fit, although he won't be 100% fit."

Sturridge defended himself on Twitter after his comments to Liverpool's official website that he was "'more worried about Liverpool and putting in good performances for us" provoked criticism from some England fans.