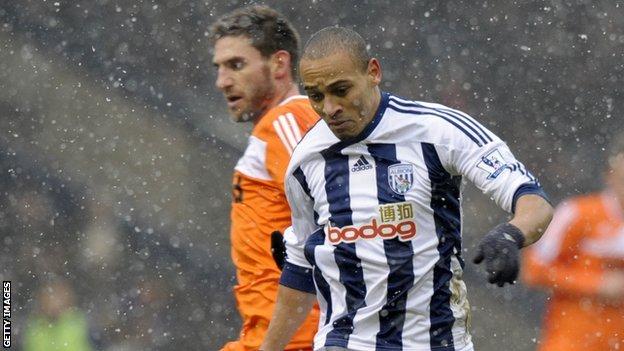 He could make his Bluebirds debut

"I see this is a stronger team than West Brom," he said. "Without any disrespect to West Brom... the club has shown what brought them here were gradual steps."

Odemwingie joined West Brom in 2010 from Russian side Lokomotiv Moscow, but fell out of favour after a failed attempt to join Queens Park Rangers in January.

He welcomed the £2.25m move to top-flight newcomers Cardiff as a

I have never met one single West Brom fan face-to-face who has said anything nasty. I still love the club

"They showed a lot of ambition in the window but it took them a couple of years of calculated steps," said Odemwingie, who hopes Cardiff can prove their survival credentials before they host West Brom on 14 December.

"From the chat I had with the manager that is the way it will be.

"They have plans for the near future and I think the objective is to stay in the league because they all know this league is very tough.

"They had a great start but the finish is the most important part and it is important to get points on the board before December."

Reflecting on events that ended with his departure from the West Midlands club, he said: "I will take part of the responsibility, but if you have a relationship on one side claiming it is perfect, then that is impossible.

"We are all human beings and we all make mistakes and I believe mistakes were made by West Brom as well.

"We learn from that. As I said before, the West Brom fans are the most important thing to me.

"I am not against the whole club. I am a fan of a lot of people in the team, among the fans as well I still get a lot of positive words.

"I have never met one single West Brom fan face to face who has said anything nasty. I still love the club."