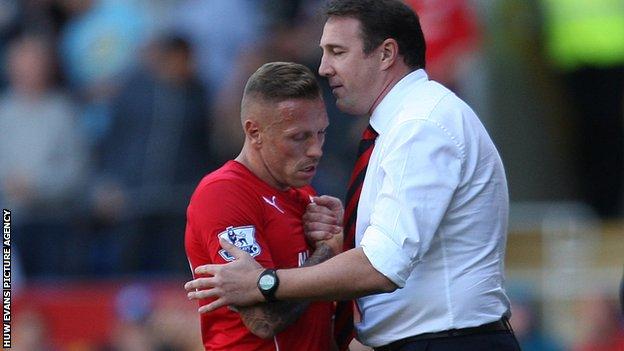 Manager Malky Mackay expects Cardiff City striker Craig Bellamy to make a decision on his playing future at the end of the season.

After helping the Bluebirds in to the Premier League he could retire when the current campaign finishes.

The 34-year-old Wales striker is out of contract with Cardiff City at the end of the 2013-14 season.

"He [Craig] is at a point now where he can look at situations like that as and when they come," said Mackay.

Cardiff-born Bellamy was a key figure in the Welsh side winning the Championship title and promotion for a first season in the Premier League.

He is an intelligent lad and he knows where he is in his life right now.

Bellamy won his 76th Wales cap in Tuesday's 3-0 defeat by Serbia in Cardiff, but revealed he has started to consider his life after football.

"My mood does change... I know I could change what I'm thinking," said Bellamy.

"But the way I'm feeling now, it could be my last season in football. I have so much to look forward to after football."

Mackay, however, says Bellamy should not be rushed into a decision about his future and points to the example set by veteran striker Kevin Phillips.

Phillips, 40, is now playing for Crystal Palace in the Premier League on a one-year deal and makes a decision on his playing future at the end of every season.

"I touch on Kevin Phillips, who has kept himself in fantastic shape, and at the end of the last couple of seasons has just decided what he wants to do," said Mackay.

"He is an intelligent lad and he knows where he is in his life right now.

"There will be a point at the end of the season where he will want to take stock of where he wants to be internationally, domestically and and his own life."

Bellamy has previously hinted he is ready to walk away from international football at the end of Wales' current World Cup qualifying campaign - they play Belgium at the King Baudouin Stadium, Brussels, on Tuesday, 15 October.

Chris Coleman's side have managed only two wins - both against Scotland - from seven games in Group A.