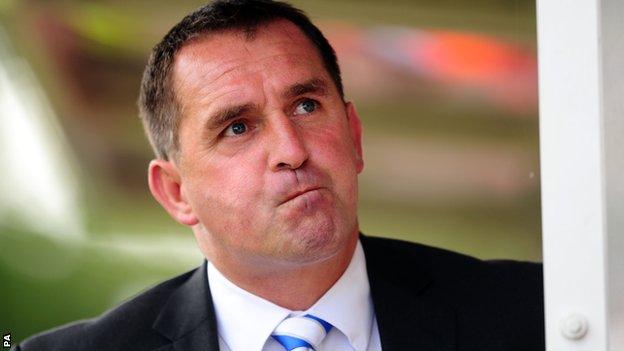 The Gills, who won the League Two title last term, are yet to win this season.

"I need to make changes, to add players and the group needs to be freshened up," Allen told BBC Radio Kent.

"I've also told all the others that after Sunday's game [against Coventry], I'll have a view to making potential further changes."

He added: "We need to improve our starting XI and we need to get better."

Striker German only moved permanently to Priestfield Stadium this summer after a loan spell last year, but has failed to score in any of his four appearances this term.

Meanwhile midfielders Whelpdale, Lee and Gregory were all part of the Gills side to earn promotion out of League Two last season.

However, Allen says that letting those players leave, despite initially having to be on loan because of the closing of the transfer window, will free up money to bring in others.

"We need to raise some money to improve our team. They're great lads, all four of them, and they've done a great job for our club, but changes need to be made," he added.

"I know the players we'd like to bring in, and we need freshening up. We need to be better, I don't think anyone can argue with that, and that's my job."

And Allen believes the decision he has made is in the best interests of the club.

"I suppose they're not very happy [about being listed], but I do my very best to make sure all my players are happy," he said. "I look after them and treat them well, but the bottom line is that we've got to do something to help the team win games.

"These are decisions that you've got to take, some could say it's brave, but I don't care what anybody else thinks. This division is strong, and we are up against some big clubs and we have to make that adjustment pretty quick."