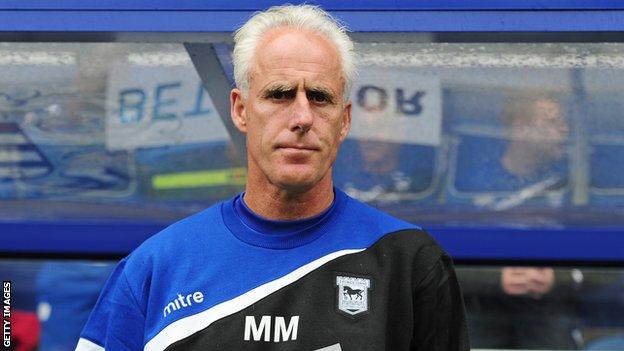 Former Republic of Ireland manager Mick McCarthy believes Martin O'Neill will be named as the successor to Giovanni Trapattoni as Irish boss.

Ipswich manager McCarthy said: "Martin has the job as far as I am aware. Absolutely nailed on, shoo-in for it.

"He is out of work and he is a good manager. So it is my understanding he has the job - so good luck to him."

McCarthy guided the Republic to the last 16 of the 2002 World Cup in Japan and South Korea.

Responding to media reports linking himself to the Ireland job, McCarthy said: "I am not surprised because I did a good job last time."

McCarthy, who took over from Jack Charlton as Republic boss in 1996, confirmed he had a clause which would have allowed him to take over from Trapattoni without the need for the Football Association of Ireland to pay Ipswich compensation - but that expired in the summer.

It has been reported that former Sunderland manager O'Neill could be handed the opportunity to become the new Republic boss within days.

O'Neill said on Thursday he had yet to be approached by the FAI over the position.

But the 61-year-old is regarded as the FAI's number one target and a formal approach appears imminent.

Leeds United boss Brian McDermott and Norwich City manager Chris Hughton had been linked with the role, but have since distanced themselves from the job.

Whether or not the new man, whoever it may be, will take up his post in time for October's penultimate World Cup qualifier in Germany remains to be seen.

Ireland travel to Cologne on 11 October a day short of a year since they were trounced 6-1 by Joachim Low's side in Dublin.

They will bring down the curtain on a disappointing campaign at home to Kazakhstan four days later, and do not have another scheduled fixture until Serbia head for Dublin for a friendly in March next year.

O'Neill, a former Northern Ireland skipper, has been out of football since losing his job at Sunderland at the end of March with the club fighting for Premier League survival.

Italian Trapattoni left the job by mutual consent following Ireland's defeat by Austria in a World Cup qualifier on Tuesday.