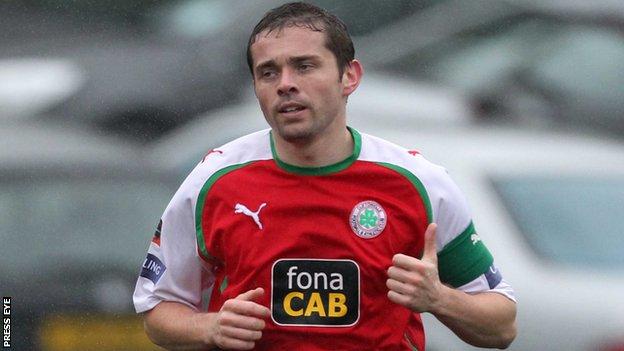 Injury-plagued striker Chris Scannell is hoping to revive his career with Cliftonville after signing a one-season contract with the north Belfast club.

Scannell missed almost all of the Reds' 2012/13 title-winning campaign because of an Achilles tendon injury.

Tommy Breslin's men are not short of firepower with the likes of Liam Boyce, Joe Gormley and Diarmuid O'Carroll in the Solitude squad.

But 36-year-old Scannell has worked hard to recover form the injury.

"Chris has been an integral part of this club for a long time and we are all pleased he feels capable of staying on and having another shot at things this season," boss Breslin told the club's website.

"He is a highly-respected figure in the game and it would have been a travesty if his career had ended on such a sour note with that injury.

Former Lisburn Distillery boss Tim McCann will be the expert pundit for Sportsound's coverage of Cliftonville's match against Glentoran on Saturday.

McCann had successful spells with both Belfast clubs and will be alongside commentator Grant Cameron at Solitude.

"It says a lot for his character that he has worked hard to recover and hopes to be in contention to play soon."

Cliftonville, runaway title winners last season, hold a one-point lead at the top of the table going into Saturday's home match against Glentoran who surrendered top spot last weekend by crashing to their first defeat of the term, 3-0 at home to Crusaders.

"We haven't had a result up there since I took over," said Glens boss Eddie Patterson, previously manager of Cliftonville.

"We are getting better as each game goes but are still a work in progress."

Elsewhere second-placed Portadown, who hit double figures for the first time in their league history in last week's 11-0 hammering of Ballinamallard, are at home to Dungannon who are tied with the Ports on 11 points.

Glenavon, up to third and also on 11 after their best Premiership start for years, take on bottom club Ards at Mourneview Park.

Linfield will aim to make it three wins on the trot when they take on Ballymena United at Windsor Park.

After a stuttering start, the Blues have enjoyed recent wins over last season's promoted pair of Warrenpoint and Ards and manager David Jeffrey's believes they are heading in the right direction.

"We are moving forward, but Ballymena will be tough. They have beaten Crusaders and Portadown this season and are traditionally difficult opponents for us," said Jeffrey.

Linfield are hoping their injury situation improves with goalkeeper Alan Blayney, defender Mark Haughey, midfielder Philip Lowry and striker Andrew Waterworth getting near to returning to the team.

Coleraine boss Oran Kearney wants to see better finishing from his side as they take on Ballinamallard at the Showgrounds.

The Bannsiders stumbled to their first defeat of the season last weekend - 1-0 at Dungannon - just days after a superb 3-1 win away to Cliftonville.

"It just wasn't our day," said Kearney. "Dungannon took their one big chance, but we did not make the most of any of ours."

Crusaders, up to seventh, will aim to make it five matches unbeaten in the league when they play Warrenpoint Town at Stangmore Park.