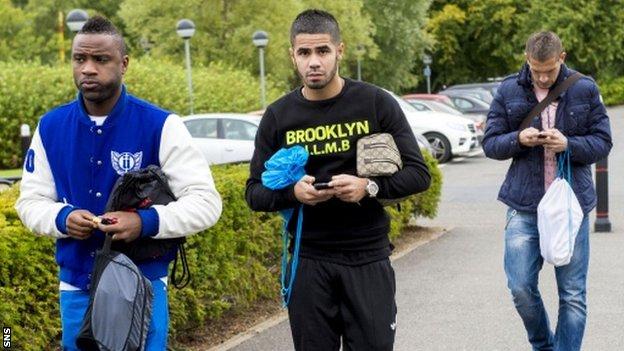 Nacho Novo, Ismael Bouzid, David Silva and Tijani Belaid are likely to learn whether they have won contracts with Kilmarnock next week.

And Kilmarnock manager Allan Johnston is considering signing two of them.

"We are not going to rush a decision, but hopefully we can make a decision within the next week or so," he said.

"It would be good to bring in a centre-half and an attacking option as well, whether that's wide or up front, just to add a bit of creativity."

Bouzid made 65 appearances for Hearts in two seasons at Tynecastle until 2011, during which time he won an international recall with Algeria.

The 30-year-old former Kaiserslautern and Galatasaray defender has since had spells in Greece with Giannina, the United Arab Emirates with Baniyas and his homeland with Alger.

"He is a big physical presence at the back and we have just got to wait and see how he goes," said Johnston.

The 34-year-old Novo also played for Raith Rovers and Dundee before six years with Rangers, .

He switched to Sporting Gijon in 2010 then Legia Warsaw before a return to his Spanish homeland with Huesca.

Belaid began his career with Inter Milan and has spells on loan at PSV Eindhoven and Slavia Prague before earning a permanent deal with the Czechs.

The 26-year-old Tunisian had a short spell with Hull then headed for APOEL, Union Berltin and half a season in the Spanish Second Division with Moreirense.

Silva, a 26-year-old capped once for Cape Verde and formerly of Porto, Tourizense, Lokomotiv Mezdra and CSKA Sofia, ended a two-year spell with Kilmarnock to join Olhanense in his native Portugal last year.