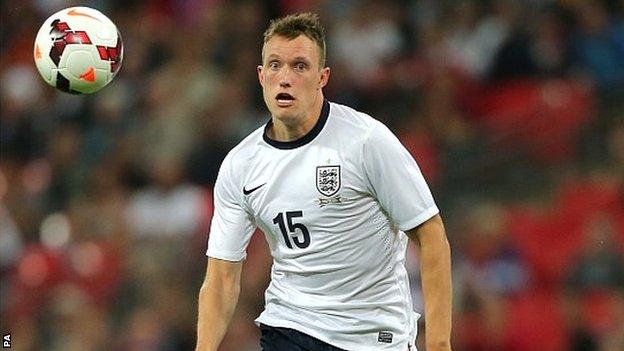 Manchester United and England defender Phil Jones has rejected Stuart Pearce's claim that he did not want to play in the European under-21 Championship.

Pearce was sacked as England U21 coach after his team lost all three group matches in Israel during the summer.

He singled out Jones and Alex Oxlade Chamberlain, who both missed the event, saying: "Once through the ivory towers of the seniors they don't want U21s."

Jones said: "I didn't expect it and I am disappointed. It's simply not true."

Jones, 21, who joined Manchester United from Blackburn in June 2011, missed the first three months of last season - and another six-week period between February and April - with a knee injury, but he was called into Roy Hodgson's senior squad for the post-season tour to Brazil and completed the full 90 minutes in a 2-2 draw at the Maracana..

Hodgson is thought to have asked Pearce not to select any player on that trip for under-21 duty.

"It was totally out of my hands," said Jones. "Roy Hodgson came out prior to the under-21 tournament and said he regarded me as a senior player.

"How he [Pearce] can come out and say I didn't want to play for the under-21s is beyond me. I have represented the under-19s, the under-21s and the seniors. I said from the first day I pulled on an England shirt that it sent shivers down my spine."